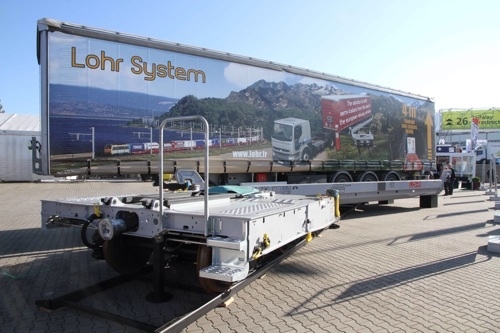 Unlike previous production wagons the new generation allows semitrailers with a 4m corner height to be accommodated within a P385 loading gauge. The new wagons have been designed with a slightly lower deck than previous versions whilst remaining within the permitted track gauging envelope.

Lohr wagons have been used for freight services conveying semitrailers since 2003 when the first service was launched linking France and Italy. Since 2007 CFL Cargo and Fret SNCF have operated rolling motorway services between Bettembourg in Luxembourg and Perpignan in south west France.

The trains operate at six-hourly frequency daily and because the lorry driver simply delivers the semitrailer and collects another from the terminal, the average wait for a lorry at the terminal is just 15 minutes.

Lohr has been working with prospective operators to develop new routes and Fret SNCF plans to introduce a new service connecting Calais with Perpignan. This will serve the British market and aims to attract some of the 6 million semitrailers that cross the English Channel annually.

Lohr will start production of 105 new-generation wagons for this service in October and construction work on a new terminal in Calais will be completed in mid-2015, enabling the service to start in January 2016.

Lohr also has won a contract for 280 more wagons for a new Bayonne – Lille service which was awarded to Fret SNCF following a public tender.

Lohr is in discussion with other operators such as DB Schenker and CFL Cargo evaluating a range of potential new services including west-to-east connections between Rotterdam and Poland and services to Barking in London using the HS1 high-speed line at night.