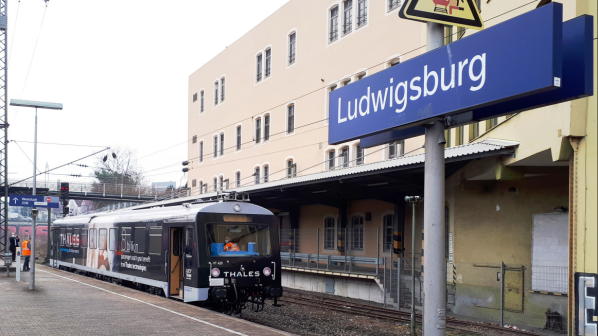 Germany: Thales completed its first ETCS tests between Ludwigsburg and Kornwestheim at the beginning of March, as part of the Digital Node Stuttgart project to install ETCS, digital interlockings and driver-assisted ATO on 100km of lines around Stuttgart. The work is being carried out under a €127m contract awarded to Thales by German Rail (DB) to deliver packages 1 and 2 of the project and is expected to be completed by 2025. The work will serve as a pilot for the digitisation of the wider German rail network by 2035.

Estonia: Estonian Railways (EVR) has begun a pilot project in collaboration with tech company Hepta Airborne to employ drones and AI-driven analysis technology to carry out inspections of trackside equipment faster and without disruption to traffic. The pilot project employs Hepta’s uBird software, which should speed up fault finding, map infrastructure object positions, and create actionable reports for maintenance teams. If successful, the method could be used to replace traditional manual inspections carried out through on-site employee visits.

Britain: A partnership of West Midlands Metro (WMM), West Midlands 5G (WM5G), GoMedia and its parent company Icomera has conducted a trial of a new real-time travel information for the visually impaired in stations and vehicles. The system, developed in collaboration with the Royal National Institute for the Blind (RNIB), was fitted to a WMM LRV in February. It can transmit relevant information to passengers’ devices in the format of their choice, via 5G cellular networks.

Netherlands: Wagon leasing company VTG and logistics provider Vega International have carried out a successful test of a vertical handling and transport technology called roadrailLink (r2L) which is designed to make conventionally ‘uncraneable’ trailers liftable for easy transfer to and from trains. The solution features a fully galvanised loading basket platform that can be lifted vertically onto and off a double pocket wagon using terminal cranes or reach stackers, without the use of a ramp or other equipment, enabling loading times of 5-8 minutes. The test was carried out in Tilburg, the Netherlands, in collaboration with terminal operator GVT.

Russia: Russian Railways (RZD) and oil producer Gazprom Neft have signed an agreement to cooperate in the development of digital information technologies. The companies plan to develop smart contract algorithms and a system for data exchange for freight wagons, which will enable easy tracking of freight along an entire route and enable more accurate delivery time predictions and shipment planning.

Switzerland: Southeastern Railway (SOB) has launched a project to ensure that tickets can be issued digitally by tourism service providers in the Gotthard region by the end of 2023. Tickets will be made available both on providers’ own channels, as well as on trenogottardo.ch. The project is expected to cost SFr 1.98m ($US 2.12m), and 50% of costs will be covered by funding from the government and the canton-funded San Gottardo programme, with the remainder coming from SOB and various sponsors.

Netherlands: Students and researchers from Windesheim University of Applied Sciences, in partnership with Netherlands Railways (NS) have developed a railway sleeper manufactured from plastic composite materials retrieved from recycled train interior walls and luggage racks. Previously, this type of material was unrecyclable, and was typically sent to landfills. The resulting sleepers weigh 123kg, substantially lighter than their 283kg concrete equivalents. A prototype is currently undergoing tests, with further tests planned if successful.

Britain: Hydrogen technology company Arcola Energy will open a new engineering and manufacturing facility at the Michelin Scotland Innovation Parc (MSIP) sustainable transport hub in Dundee, Scotland, after securing a £1.5m grant from economic development public body Scottish Enterprise. An initial group of 20 Arcola employees will support the University of St Andrews’ hydrogen train project, as well as product development for other hydrogen-powered vehicles. Arcola hopes to eventually have 850 employees based at the site by 2028.

Britain: Harsco has contracted Thales to equip its four new Multipurpose Stoneblower track maintenance machines with ETCS Level 2 onboard systems according to Baseline 3 Maintenance Release 2 capable of allowing dynamic transitions to and from the TPWS/AWS British national train protection system. The Multipurpose Stoneblower machines are an alternative to traditional tamping methods which pneumatically inject ballast under the sleeper without disturbing the compacted foundation.