The new line will eventually link the centre of Dakar with the new Blaise-Diagne International Airport in 2023. 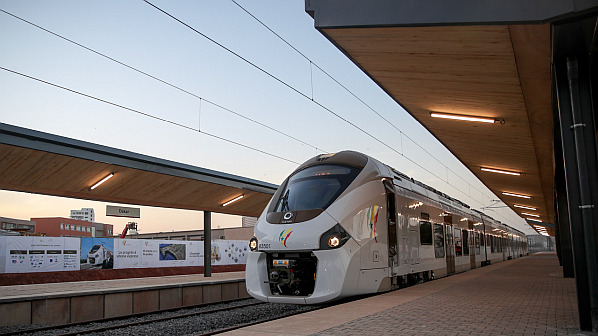 The first phase of the Dakar TER was inaugurated on December 27.

THE president of Senegal, Mr Macky Sall, inaugurated the first section of the 57km standard-gauge Dakar TER line on December 27.

The initial 36km section of the double-track 25kV ac electrified line was due to open in the middle of 2019, with the remainder opening the following year. Many of the subsequent delays have been caused by the Covid-19 pandemic.

The initial section is the 36km section from Dakar city centre to Diamniadio, and is expected to carry 115,000 passengers per day. Seter (a consortium of French national railways SNCF and Keolis) is operating the TER under an operation and maintenance contract for five years when it is expected that a new state-owned operator Asenter will take over. This initial period is to Asenter to gain competency in operating the railway. An extension for Seter is possible.

Eventually the line will connect Dakar to the new Blaise-Diagne International Airport (AIBD) with journeys taking 45 minutes, with the second phase due to open in 2023.

Speaking at the launch ceremony, Sall said traffic jams cost Dakar CFA Franc 99.7bn per year and that the new line will help ease pressure on the city’s road network. Travel on the new line is free until January 13 after which fares will be introduced.

The new line follows largely follows the western section of the existing Dakar - Diourbel metre-gauge line, which has been upgraded as part of the project.

Four-car 72m-long 160km/h Alstom Polyvalent bi-mode trains operate on the line. They have capacity for 565 passengers in first and second class, and can operate in multiple. The trains feature Wi-Fi and power sockets and while technically similar to the electro-diesel variant of the Coradia Polyvalent fleet delivered to France, they feature an enhanced HVAC system for the Senegalese climate.

Trains operate between 05.00 and 22.00 daily with a 20 minute frequency, and there is a plan to integrate with bus links currently under construction.

The Dakar TER is part of the Emerging Senegal Plan (PSE). Sall said that 8500 local residents were employed on the construction of the first phase of the TER and there are 1000 employees recruited for the line from 68,500 applications. A further 2000 work in the supply chain.

Sall also confirmed that the Senegalese government is working on creating several resettlement sites for those affected by the construction of the line.

For detailed data on projects across Africa, subscribe to IRJ Pro.