Westbahn is ready to leave the Covid era behind and is eyeing service expansion in Austria and beyond, as recently appointed joint managing director, Thomas Posch, explains to Kevin Smith. 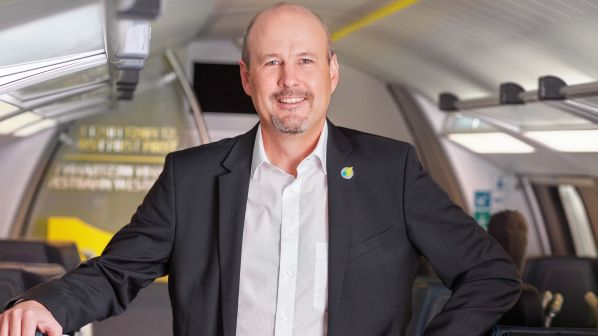 THE last time Westbahn spoke to IRJ in February 2020, the Austrian private operator was experiencing what joint managing director, Mr Thomas Posch, says was probably its best financial month ever. Westbahn had recently cut back its service offer as it awaited the delivery of a new fleet of 15 Stadler Kiss 3 six-car double-deck trains to replace the legacy fleet it had sold to German Rail (DB) in mid-2019, which had enabled the company to dramatically reduce its overheads.

With no revenue, Posch says Westbahn was on the verge of ceasing operation. However, thanks to a financial support package agreed with the Austrian government in mid-April 2020 Austrian Federal Railways (ÖBB) and Westbahn maintained an hourly service between Vienna and Salzburg until July 2021 when competition resumed.

While the government subsidies and access to worker furlough packages kept Westbahn running, Posch says it did not stop the accumulation of losses for costs not covered, including from rolling stock not in service. As a result, Posch says the focus was on limiting the losses as much as possible. “From the competition point of view it was a boring era because it was crucial for us to survive,” Posch says, stating that the company remains in a healthy financial position.

“This is mostly driven by the sale of the fleet to DB. The money we got is the buffer we have.”

In the second quarter of 2022, things are slowly but surely returning to normal. Westbahn’s loadings were at around 75% of their pre-pandemic levels in mid-April, up from 50% in January. The operator has gradually restored service levels on the Vienna - Salzburg route, including to 22 daily trains on April 8 with a full 30-minute interval service now expected to return in June.

“We have much better quality with our trains and much better service with our staff. And that’s the reason why we can also ask for more money from the customer.”

Price adjustments enacted since 2020 mean that per-km and passenger revenue is now much higher than it was two years ago. “That means our revenues should be on a totally different level than 2020,” Posch says. “They aren’t at the moment. There is still a 30% gap to where we should be.”

Posch and his fellow joint managing director, Mr Florian Kazalek, succeeded CEO, Dr Erich Forster, on March 1. Posch says that several strategies have been introduced, including tweaking the price structure. Rather than a set 30% reduction on standard ÖBB fares, this is now 5-30% depending on demand.

“It is still a significant difference but we have room to move the prices up so it is not too cheap,” he says. “We have much better quality with our trains and much better service with our staff. And that’s the reason why we can also ask for more money from the customer.”

Another change is to focus solely on open-access. ÖBB was directly awarded long-distance public service obligation contracts in Austria, meaning opportunities are limited with tendering not expected to start until 2026-27 for contracts that will run from 2029.

The government’s Klimaticket initiative is also helping to attract new passengers. More than 150,000 users have signed up for the universal annual public transport ticket usable with all operators including Westbahn since its launch in October. This is way above expectations and Posch says Westbahn is doing everything it can to offer an enticing alternative to passengers who were previously “addicted to ÖBB.” This includes loyalty points, which are exchangeable for free tickets or an item from onboard vending machines, and access to the train’s Comfort section.

Westbahn commenced operation of its first cross-border trains from Vienna West to Munich on April 8, a major milestone for the company. Posch says the launch was planned for December but was held up by issues with certifying its Kiss 3 fleet in Germany despite Stadler stating that it had based the vehicles on the Kiss 1 and 2 sets to avoid such a scenario. Posch was understandably frustrated given that the European Union Agency for Railways (ERA) is now overseeing vehicle authorisations. “The big problem is that many initiatives at the EU level are weak because there are so many bureaucratic hurdles,” he says.

Nevertheless, loadings “exceeded expectations” in the first few days, and Posch says he was optimistic heading into the busy easter period in mid-April.

“We expect CRRC to do everything they can to put the trains into service because Westbahn is their door opener to the European market.”

Other new destinations could soon follow. The growth of Klimaticket subscriptions and the flat passenger-km rate received has opened up the possibility of extending the Vienna - Salzburg service to Innsbruck which ÖBB serves under a PSO contract.

Other Austrian destinations such as Graz and Klagenfurt are unlikely before completion of the Koralm and Semmering tunnels later this decade. Further expansion into Germany is also not foreseen. However, Budapest, Bratislava and Zürich are on the operator’s radar once it receives certification for four six-car trains ordered from CRRC.

The first of these trains are on test in Germany. Posch would not commit to a specific date for their entry into service, stating that this is dictated by securing certification of the fleet, with ETCS proving particularly challenging. Westbahn is under no financial obligation until the fleet is certified. And when asked why Westbahn bought CRRC trains, Posch says the answer is “simply the price.”

“You pay two-thirds of Stadler’s cost and you get the same capacity and the same quality,” he says. “If not, we would not have taken on these trains. We expect CRRC to do everything they can to put the trains into service because Westbahn is their door opener to the European market.”

The trains will also open new doors for Westbahn. And with Covid increasingly in the rear-view mirror, the operator’s future looks promising.