KCS has notified CP that it intends to terminate their merger agreement. 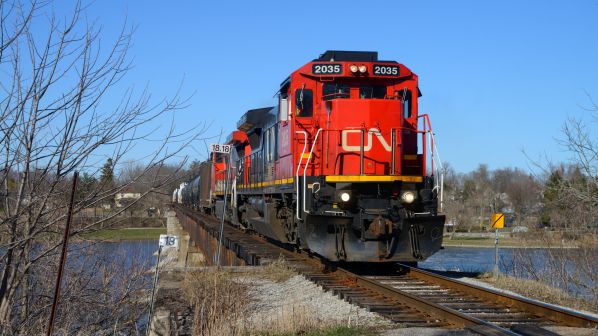 UNITED States Class 1 Kansas City Southern (KCS) has ruled that the revised acquisition proposal it received from Canadian National (CN) on April 20 is a superior offer to the merger agreement it entered into with Canadian Pacific (CP) on March 21.

CN’s proposal offers KCS shareholders $US 325 per common share based on the closing price of CN shares on May 12, which implies a total enterprise value of $US 33.6bn, including the assumption of approximately $US 3.8bn of KCS debt. Under the terms of CN’s revised proposal, KCS shareholders will receive $US 200 in cash and 1.129 shares of CN common stock for each KCS common share, with KCS shareholders expected to own 12.6% of the combined company.

CN says this represents an implied premium of 45% compared with KCS’ unaffected closing stock price on March 19. KCS’ preferred shareholders will continue to receive $US 37.50 in cash for each preferred share. Under the terms of the revised proposal, a wholly owned subsidiary of CN has also agreed to reimburse $US 700m to KCS in connection with the payment of a termination fee to CP.

The transaction would be subject to approval by the stockholders of KCS, approval of a voting trust by the Surface Transportation Board (STB), receipt of other regulatory approvals and other customary closing conditions.

After consultation with its external legal and financial advisors, the KCS board of directors determined that CN’s revised proposal constitutes a “Company Superior Proposal” as defined in KCS’s merger agreement with CP. KCS has notified CP that it intends to terminate their merger agreement and enter into an agreement with CN, subject to CP’s right to negotiate amendments for at least five business days and the KCS board’s further determination as to whether any such amendments would cause the CN proposal to no longer to constitute a superior proposal.

However, CP said it was “not surprising that CN would raise its offer, and it only highlights CN's recognition of the significant regulatory risk and challenges associated with its anti-competitive bid.”

“There is nothing new here; this doesn't make it any more likely that the CN proposal can close into a voting trust,” the railway says. “The STB already approved CP's use of a voting trust for its pro-competitive combination with KCS. We believe that CP's negotiated agreement with KCS is the only true end-to-end Class 1 combination that is in the best interests of North American shippers and communities. CP-KCS is a once-in-a-lifetime opportunity to not only protect all existing shippers options but to inject new competition and capacity into the North American transportation system.

“As we've said repeatedly, we are not going to enter into a bidding war. Our mutually negotiated agreement with KCS represents compelling short term and long term value for shareholders that is actually achievable.”

CP says it will respond to KCS within the allotted time.

CN says it is confident in its ability to obtain approval from the STB and other regulatory bodies on a timeline consistent with the proposed CP transaction. CN has proposed to use a voting trust and trustee that are identical to those the STB approved for CP’s proposed acquisition. KCS shareholders will receive the merger consideration immediately upon the closing of CN’s voting trust, which is expected to be in the second half of 2021. CN’s proposed transaction will also not require the approval of CN’s shareholders, eliminating a closing condition required by the CP deal.

CN says it expects the deal to be completed in the second half of 2022.

“We are delighted that KCS has deemed CN’s binding proposal superior, recognising the many compelling benefits of our combination and expressing confidence in CN’s ability to obtain the necessary approvals and successfully close the transaction,” says CN president and CEO, Mr J J Ruest. “Our proposal offers a clear path to completion and is structured in a way that gives KCS shareholders both greater immediate value and the opportunity to participate in the future upside of the combined company.

“Together, CN and KCS will seamlessly connect ports and rails in the United States, Mexico and Canada by providing superior service, enhanced competition and new market access to move goods across North America safely and efficiently. We are encouraged by the widespread support we have received for the transaction thus far and will continue to work closely with KCS and all relevant stakeholders to fully realise the benefits and opportunities available through a combined CN-KCS.”

KCS is due to holder its 2021 Annual Meeting of Stockholders on May 20.