Dingqing Li and Nicholas Wilson, with TTCI, Brian Marquis, from the Volpe Center, Boston, and Ali Tajaddini, with the FRA, explain how test results from the High-Speed Adjustable Perturbation Slab Track testing facility are being used to verify and improve track geometry measurement systems and vehicle/track interaction. 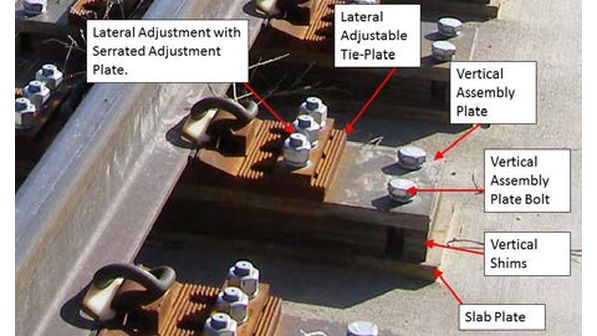 There are two main objectives for the HS-APS involving the evaluation and testing of:

For the second critical function, vehicle performance specifications require analysis and/or testing of a vehicle’s dynamic response to specific track geometry perturbations, such as the Minimally Compliant Analytical Track (MCAT) federal regulation, and the perturbations specified in the Association of American Railroads’ (AAR) Manual of Standards and Recommend Practices for testing new freight vehicles.

To address these needs, the HS-APS was designed and built with precisely adjustable track geometry and track property - stiffness and damping - variations. It is part of the existing high-speed Railroad Test Track (RTT), a 21.7km loop with a maximum speed of 266km/h in tangent sections and a limiting speed of 212km/h in a 1400m-radius reverse curve.

The tangent portion of the RTT high-speed test loop includes a slab track with specially designed sleeper plates that are adjustable so that a maximum vertical perturbation of 44.5mm can be installed while a lateral adjustment of 38.1mm is possible on either rail. Specially designed plates and shims allow track geometry deviations of 3.2mm (Figure 1). By using rail seat pads or vertical shims with different rubber pads, various track stiffness and damping properties can be achieved. This test track can be used to create different types of track geometry perturbations at different wavelengths, including surface, gauge, alignment, cross level deviations, and their combinations.

Older rails used in this section of the track were replaced with new rails, as the wear and deformation at the welded joints of the older rails affected the accuracy of the installed track perturbations. To facilitate the creation and adjustment of track geometry perturbations with various amplitudes and wavelengths, expansion joints were installed outside but adjacent to the test section.

For the wheel-rail force measurement, 10 locations were selected along the test section to capture their variations corresponding with various perturbations under different testing speeds. All the circuits and transducers were calibrated prior to testing with a portable calibration fixture or a test vehicle that can apply and measure vertical and lateral wheel loads to the rails.

All three methods required the installation of permanent survey benchmark monuments. A portable track geometry measurement system can provide alignment, surface, gauge, cross level and curvature measurement. The first two measurements are performed by hand from one sleeper to the next and are time-consuming. The third method requires post processing/filtering to produce the ground truth data. FRA is currently developing an improved and automated method for ground truth measurement.

Since 2015, several on-track testing programmes have been conducted on HS-APS with various perturbations, including activities for the first and second objectives and critical functions.

For the blind tests 6 and 9, the operators of the TGMS were not informed what the wavelengths and amplitudes of the perturbations were until after the measurements were completed. For the other perturbations, the TGMS operators were informed of the intended track geometry in advance.

For each design perturbation, the unloaded track geometry was measured using the survey equipment and the portable track geometry car to establish the ground truth reference. DOTX-216 was then tested over each perturbation at different speeds from 32 to 169km/h. The testing speed was limited by the maximum speed of the locomotive available. Each testing speed was repeated three times over the same test zone. The same number of tests at different speeds were also conducted in the opposite direction.

Figure 4 shows example vertical profile results (inside rail) from DOTX-216 for the design perturbation test 5 obtained under various testing speeds, including space curve results, mid-chord offset (MCO) results based on three chord lengths of 9.5m, 18.9m and 37.8m. Ground truth data were also included for comparisons with TGMS results, processed in terms of space curve and MCO formats. Vertical profile results can appear differently depending on whether they were processed in terms of space curve or MCO, while chord length can also affect the results significantly.

During all test runs, the research team monitored vehicle dynamic response of the DOTX-216 and the locomotive (DOT-203), as well as the track component deformation, using onboard transducers and wayside instrumentation. For all the design perturbations tested, vertical and lateral wheel-rail forces, and lateral to vertical force ratios (L/V or Y/Q) were all well within FRA CFR and AAR Chapter 11 limits, with the maximum L/V ratio below 0.3. Figure 5 shows L/V ratio results recorded under the locomotive and TGMS at various speeds over design perturbation test 4.

For all test runs conducted, the maximum lateral rail displacement was 1.3mm, and the maximum rail roll angle was 0.5°. The maximum slab deflections were insignificant - less than 0.6mm vertically and 0.6mm laterally.

Test results and findings from HS-APS are being used to develop the procedure for verifying and improving track geometry measurement systems and vehicle/track interaction. The test facility has great potential to improve the measurement accuracy of track geometry inspection vehicles and improve passenger vehicle designs based on their responses to various track geometry perturbations and track properties.

Lessons learned and recommendations include: for testing on the HS-APS, blind tests should be included to evaluate any TGMS to ensure impartiality of the test and evaluation process; design perturbations should include wavelengths that are not standard FRA chord lengths; and heat waves and wind can affect accuracy and repeatability of survey measurements significantly for ground truth.

For the design and construction of the HS-APS, lateral adjustment should allow the correction of initial alignment not perfectly centred; finer adjustment smaller than 3mm is needed to accurately install exact lateral sinusoidal shapes; designs that minimise bolts used are better for long-term use due to less wear on bolts and fewer broken bolts; and variations in ambient temperature can affect perturbations - expansion track joints are needed to allow the rails to breathe.

FRA plans to design and install another HS-APS in a section of curved track on the RTT. The design of this new curved HS-APS is underway and will consider the lessons learned from the HS-APS installed on tangent track.

This article is based on a submission to the World Congress on Railway Research 2019, which won the best paper award in the Railway System Interface category.