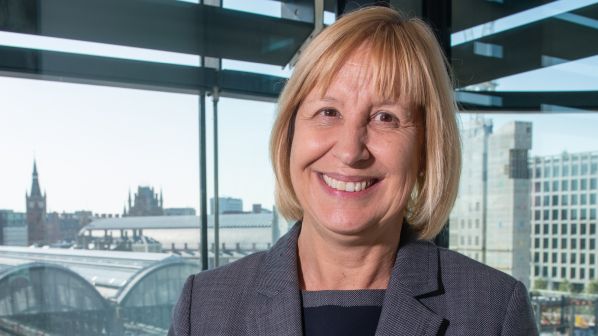 2020 was all set to be a momentous year for High Speed 1 Ltd (HS1). The holder of a 30-year concession to operate the 109km London St Pancras - Channel Tunnel high-speed line, Britain’s only high-speed railway, commenced its latest five-year funding period, Control Period 3 (CP3), at the start of the financial year in April.

As well as regular maintenance and renewals, CP3 includes exciting plans to transform HS1 into Britain’s first carbon neutral railway (see panel below). However, with the onset of the coronavirus pandemic in March, Ms Dyan Crowther, CEO of HS1, says the railway had to adjust to the new situation.

Indeed, Crowther says HS1 is now in a state of continuous uncertainty. Uncertainty at when passengers will return to London and South Eastern Railway’s (LSER) domestic Javelin services; and uncertainty over the future of international operator Eurostar, which as IRJ went to press is operating just four trains per day after a 95% drop in passenger traffic.

“Like many businesses, we’re having to look at what our future state is going to be,” Crowther says. “That has changed throughout the pandemic. Like most people, we were thinking in the early stages that this would be over by Christmas and how do we get through to then. This is not the case. What has become clear is that there are other macro trends, which will impact rail demand moving forward. LSER has about 30% of passengers compared with pre-pandemic. Eurostar is operating at about 5%. This all has a knock-on effect.”

Around 88% of HS1’s revenue is from track access charges where operators pre-book and pay for slots. Crowther says this means HS1’s finances have largely been stable throughout the first six to 12 months of the pandemic. However, the situation has changed.

“From December, Eurostar advised us that they will be putting in a zero-timetable bid because they just cannot predict what services they will run and what demand is going to be,” Crowther says. “If you have a company that has lost its revenue and has got quite a high fixed cost base, it’s going to focus on costs. It will use any lever available to it to reduce that cost exposure.”

The natural response for HS1 is to drive up passenger numbers. But faced with the “perfect storm” of the pandemic, quarantine on arrival, and Brexit, the situation with Eurostar is of grave concern and becoming increasingly perilous.

Unlike LSER, which is benefitting from the government’s Emergency Recovery Management Agreements (ERMA), enabling the franchise operator to continue to provide an almost full service, as an open-access operator Eurostar is falling between the cracks.

With Eurostar 45% owned by private equity, 45% by French National Railways (SNCF), and 10% by Belgian National Railways (SNCB), Crowther says the British government’s attitude has been that it is a problem for “the French to sort out.” “This is despite the fact it is a UK-based company and brings significant benefits to the UK and France,” she says.

With no clear solutions in sight, Eurostar and HS1 made their grievances public in November. Crowther and Mr Jacques Damas, who took over as Eurostar CEO on October 1, published an article in The Independent newspaper in which they warned that without government support, the service could fail. Eurostar also released a statement on November 25 calling for its inclusion in a financial support scheme for airports, which could provide up to £8m to support fixed costs, as well as general transport support schemes.

“Eurostar has been left fighting for its survival against a 95% drop in demand whilst aviation has received over £1.8bn in support through loans, tax deferrals and financing,” Eurostar said. “We would ask that this scheme be extended to international rail services and more generally for the government to incorporate high-speed rail in its support for the travel sector, and in doing so help protect the green gateway to Europe.”

“There have been lots of discussions,” Crowther says. “But no real clear solution on how we can protect international rail travel and to make sure that when passenger demand does come back, Eurostar is in the strongest possible position to be able to capitalise on that.”

The transition period for Britain’s exit from the European Union was set to end on December 31, with negotiations seemingly set to go down to the wire on how the future relationship will work.

Crowther says she is hopeful that a deal could be struck before the end of the transition period to avoid any major disruption. She says HS1 has engaged in a significant amount of work with the parties involved with Brexit to make sure that some of the unique selling points of trans-continental high-speed rail remain in place. Among these is the capability for passengers to arrive 30 minutes before their train departs at St Pancras.

“We very much welcome the nine-month extension on the validity of train licences issued from the UK to continue operating in the Channel Tunnel,” Crowther says. “However, we are still waiting for confirmation from the French side that UK passport-holders will be able to use e-gates at St Pancras International. Once passenger demand picks up next year, there is still the potential for disruption to passenger journeys because of the requirement for UK passports to receive a ‘wet stamp’ from French immigration officials.”

Despite the challenges and uncertainty, Crowther believes the case for high-speed rail has never been stronger. HS1 tasked consultant Steer Davis Gleave to come up with a study of the benefits offered by HS1 in order to support the case for HS2, the under-construction line between London, Birmingham and Lichfield. Crowther reports being pleasantly surprised by some of the results.

According to the study published in March, HS1 delivers £427m of benefits to Britain and continental Europe each year. The railway has helped to reduce CO₂ emissions equivalent to 60,000 short-haul flights per year, or 750,000 tonnes of carbon. Domestically it has helped to take 6000 cars off the road each year while 164,000 households in Kent are now within a 30-minute rail journey of central London. Eurostar also supports a £2bn annual injection from tourists into the British economy.

With the benefits apparent, work continues to attract new operators to use the railway. It is more than 10 years since German Rail (DB) operated a demonstration ICE service to St Pancras with a view to introducing regular trains. That service never materialised. And on taking the job in 2016, Crowther says she asked how hard could it be to get more services on the departure board at St Pancras?

“It’s quite tough actually,” she says. “We’ve worked really closely with a number of our adjacent infrastructure managers: Eurotunnel, being quite key; SNCF Network; and Lisea, which is a concession like ourselves and operates the Tours - Bordeaux high-speed line. There was a lot of work on what a service proposition could look like for a high-speed service from London to Bordeaux, how much rolling stock you would need, and how much that market could sustain.”

As well as Bordeaux, Crowther says Frankfurt is on the group’s radar with discussions ongoing with infrastructure managers and possible operators. “There’s an opportunity to work with those infrastructure managers to help them grow their markets and also help train operators so that rail can actually compete with air because it is a complicated process,” Crowther says.

Work is also taking place to boost domestic traffic. The railway has capacity to deliver a further £101m in economic benefits and reduce carbon emissions by another 500,000 tonnes per year. Crowther says HS1’s board and shareholders are keen to exploit this capacity and to understand the potential restrictions on users accessing the railway with a view to removing them.

One of these is the cost of using HS1, with the relatively low use by freight indicative of its high access charges, particularly when compared with conventional British lines.

However, HS1 is in a quandary over offering an attractive proposition to operators and securing enough revenue to fund asset maintenance and renewals following a shortfall in CP2.

Britain’s regulator, the Office of Rail and Road (ORR), confirmed an increase in the access charge and a shift to a per-km model, rather than per minute of use for passenger operators in January. HS1 now charges £2086.72 for each Eurostar passenger service, £1550.25 for LSER services from St Pancras to Ashford, and £809.80 for LSER trains from St Pancras to Ebbsfleet. The figures have increased 19% from CP2. Freight is charged £8.48 per train-km, a 12% jump. However, this is significantly less than the 43% hike for international and 25% for domestic passenger traffic, and 74% for freight requested by HS1.

The charges translate into £25.9m for annual renewals, £12.3m less than envisaged by HS1. ORR says the reduction was necessary to ensure operators, and in turn passengers and freight users, get a good deal now, but not at the expense of future generations.

Offering new services is of course dependent on securing demand from users. The railway that emerges after the pandemic is likely to be quite different from before. Indeed, Crowther says the pandemic has all but ended the season ticket model. She says operators must be prepared to adjust to changing passenger behaviour associated with new working practices.

“Does it mean there will be more discretionary travel at weekends?” Crowther says. “If you’re not going into London five days a week, are you going to be more likely to go in at the weekend? As a sector we have to be ready to respond to that.

“Some of the analysis that Kent has done suggests that passenger demand will recover to pre-Covid levels by 2025. I think we’re starting to see that as a consistent message: that traffic will recover but it is not going to be quick.”

With Eurostar continuing to struggle, the operator needs answers to this dilemma, and fast. The start of Covid-19 vaccination programmes at the end of 2020 is an encouraging development. However, the first few months of this year will be critical to both the international operator and HS1’s prospects.

HS1 Ltd says that it will employ a combination of wind and solar power for all energy used to power trains, buildings and other infrastructure. It will also use Renewable Electricity Guarantee of Origin (Rego) certificates acquired from its energy supplier, Npower Business Solutions, to report the level of renewable energy used to power trains and stations, and measure progress in achieving its targets.

The railway is aiming to reduce overall energy usage by 10% over the next decade. In addition, HS1 Ltd says that it will work with Eurostar and LSER to reduce the carbon footprint of every passenger by 25%.

HS1 says it will eliminate the use of landfill for non-hazardous waste by 2022 and recycle 90% of all waste by 2023. The railway is also targeting a Biodiversity Net Gain by 2030, in which 136 sites covering 106km of track will be in a visibly better condition compared with the 2020 baseline, which will be determined following the completion of a full survey in 2021.

HS1 adds that it will establish a new reporting scheme and framework to guarantee that all targets are met, and to maintain compliance with all environmental regulations and initiatives.