Steady increases in tonnages, traffic volumes and maximum speeds during the last 60 years have driven track component manufacturers to develop new products able to meet growing track forces. David Briginshaw reports on some of the key achievements by four of the leading suppliers as they adapt to new challenges. 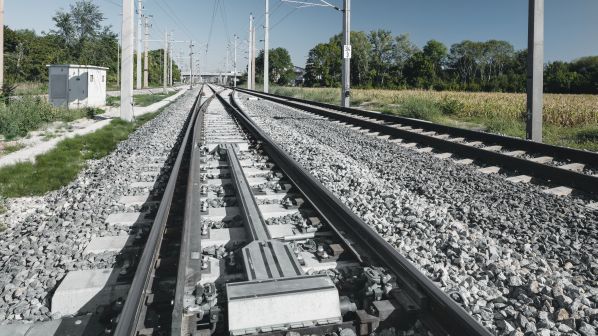 Track design has evolved a lot since the 1960s as this Voestalpine switch demonstrates. Smart switches can detect their condition while allowing longer intervals between maintenance.

TRACK technology has come a long way in the last 60 years as trains have become heavier, longer and faster and operate more frequently. This in turn has pushed track engineers to develop higher quality rails which withstand greater forces and are more resistant to wear and defects such as corrugations, spalling and rolling contact fatigue (RCF).

Axleloads have steadily increased to 25, 30 or even 35 tonnes. Fortescue Metals Group (FMG) went even further when it opened its heavy-haul line in Western Australia’s Pilbara mining region in 2008 with a maximum axleload of 40 tonnes. This was increased to 42 tonnes in 2014 and 43.5 tonnes a year later. FMG, working in partnership with SKF, developed a 45-tonne-axleload bearing, which is now fitted to its ore wagons.
Similarly, train speeds have risen from 160km/h in the early 1960s, to 210km/h with the opening of the Tokaido Shinkansen in Japan in 1964, to 260km/h in France in 1981, 270km/h two years later, 300km/h in 1989, 320km/h in 2008, and now 350km/h, with the prospect of even higher operating speeds in the future.

“Our introduction of continuously cast feedstock for rail manufacture in the mid-1970s has been one of the most influential developments in enhancing rail performance,” Austin says. “High-integrity, clean, continuously-cast steel with precise alloy control and low segregation is a must for quality rail. Coupled with mill developments since the transfer of rail production from Workington to Scunthorpe, continuously cast blooms have allowed us to produce much longer rails up to 120m in a single piece, or 216m with a single weld.”

“The zinc-rich coating is thermally sprayed onto the rail, protecting the steel from the harsh combination of water and salt.”

“As the first European rail manufacturer to introduce a heat treatment process, our first heat-treated rail was rolled in Workington in the mid-1980s,” Austin says. “After rolling at high temperatures, the rapid cooling resulted in a rail that was harder and more wear-resistant, allowing it to better withstand the rail wear brought on by faster trains and heavy freight.”

An unfortunate consequence of increasing rail life is that the potential for corrosion also increases. “That’s why, working closely with Network Rail (NR), we introduced Zinoco, a rail protection system with a durable coating to withstand corrosive track environments,” Austin explains. “The zinc-rich coating is thermally sprayed onto the rail, protecting the steel from the harsh combination of water and salt. It also provides sacrificial cathodic protection, so still works, even if the coating is damaged. Our latest enhancement makes Zinoco the world’s first rail with a super-hydrophobic finish, keeping the rail dry and free from contaminants. Zinoco offers a typical life extension of five to 10 times.”

Mr Albert Jörg, vice-president, corporate product management with Voestalpine Railway Systems, says one of Voestalpine’s major achievements was the development of its unique HSH heat treatment technology for rails aimed at improving the rail’s resistance to degradation without interfering with its weldability.

Another important milestone was the development of cast manganese frogs featuring tri-metal-weld technology for continuous running surfaces and the EDH explosive depth hardening process which has also been applied to this type of frog.

Digitalisation rose to the fore in the late 20th century. “In 1997, highly innovative hot box detectors represented the start of the development of the Phoenix monitoring suite,” Jörg says. “Today, this monitoring suite consists of Phoenix MDS modular diagnostic systems, based on various sensor technologies, and the Phoenix CMS central management software.

Besides their classic tasks, both are serving as the basis of the transition of the railway towards fully autonomous operation, where real time information on rolling stock condition is an unquestionable necessity. Furthermore, the condition of the rolling stock and the consolidation of all data measured at any point provides the basis for condition-based and predictive maintenance on train fleets.”

But Jörg says this goes far beyond the collection of data. “It involves the management of data in a way that big data becomes smart data available for analysis, planning and measurement,” he says. “Point machines are able to detect their condition and allow stretched inspection cycles while significantly improving reliability and avoiding spontaneous interferences.”

Mr Wayne Peacock, global head of sales with Pandrol, points out that the company invented its PR clip in 1958 - three years before the first issue of IRJ was published. “Fastclip FC, introduced in 1992, was the first rail fastening system that was both captive on the concrete sleeper and could be installed with high output automated clipping modules, requiring no manual intervention,” Peacock says. “This transformed installation rates for both new track projects and track renewals, as well as improving worker safety and quality standardisation.”

Peacock says the invention of the one-shot crucible - the world’s first disposable crucible - in 1988 “transformed aluminothermic welding.” The one-shot crucible includes a tapping system (thimble) which eliminates the need for separate components and helped to improve weld standards and worker safety as well as save time.

“The Startwel ignition system, developed in 2014, replaced the traditional ‘sparkler’ igniter used by aluminothermic welders,” Peacock says. “The design enables welders to ignite the charge and initiate the pour process of the weld easily and safely, increasing accuracy and eliminating the risk of unintended thermite ignition by stray sparks.”

Vossloh can trace its history back to 1883 when Eduard Vossloh, a blacksmith, received a contract from the Royal Prussian Railway for the manufacture of spring washers for rail fasteners. Today, Vossloh produces a wide range of rail fastening systems, turnouts including drive and detection systems, and concrete sleepers and bearers.

One of its innovations is its New Generation (NG) fastening system which has a higher proportion of plastic instead of steel, while the design of the modular components results in good insulation and lower weight.

Vossloh says the use of glass fibre-reinforced plastic components has driven the development of rail fastening systems, such as the 300 NG for slab track applications which is designed to transfer dynamic loads into the concrete substructure. The compact design has a high installation efficiency and rapid adjustability in the event of track position errors.

Another example is the new screw-dowel combination NG where the dowel is made of polyoxymethylene (POM) which does not absorb moisture, which Vossloh says is an advantage in tunnels or areas prone to high humidity. The optimised thread geometry of the dowel ensures that when the screw is tightened, the tangential and transverse forces are primarily directed down into the concrete sleeper.

Another innovation is Vossloh’s Protect premium coating to protect the steel components in rail fastening systems from corrosion even under extreme conditions, such as high temperatures or large temperature variations, aggressively salty air in coastal regions or industrial areas with high chemical loads. The coating is designed to meet the highest protection class C5-H according to ISO 12944 and provides cathodic corrosion protection which ensures that the steel components remain rust free even after suffering damage, for example from flying ballast.

The coating can be applied extremely thinly to maximise fitting accuracy for bolts with metric threads, for example. Vossloh says the coating is free of heavy metals and there is no risk of manufacturing-related hydrogen embrittlement.

Economic efficiency and reliability have been key drivers for any innovation, but today the environmental impact of any solution is of equal importance.

“The CO₂ footprint of a turnout can be reduced by 35% and more over its service life just by simply choosing the right turnout design,” Jörg says. “Smart design of railway infrastructure subsystems and components emerges from combining design, geometry and materials.”

“Digital technology will clearly continue to be a key driver of future innovation in rail.”

Jörg adds that Voestalpine’s recently developed switches feature adjustable component geometry to allow foreign objects between the switch blade and stock rail to be detected without the need to use end-position-detectors. “This reduces the complexity of the turnout without reducing its intelligence, while also increasing the intelligence of standard turnouts without the need for additional sensors,” he says.

“Digital technology will clearly continue to be a key driver of future innovation in rail,” Peacock says. “Digital innovation is also likely to help our industry tackle the issue of reduced workforce availability. Remote track condition-monitoring and targeted maintenance intervention using robotics are both sure to be major areas for future development.”

Vossloh is currently building what it claims will be “the world’s most advanced production plant for rail fastening systems” at its headquarters in Werdohl, Germany. Vossloh says the new factory will be designed to use alternative energies and efficient burner technology, while insulation of the ovens will be optimised and maximum use will be made of waste heat to reduce the carbon footprint. There will be a comprehensive carbon monitoring system throughout the manufacturing process, which includes suppliers from raw material extraction onwards, which will consider direct and indirect greenhouse gas emissions throughout the life of a product in a particular application. Digitised processes and the latest automation technology will help reduce response and cycle times.

However, most infrastructure managers have yet to recognise the benefits of considering the long-term life of components, such as rails, in procurement and all too often still select products on the basis of price rather the most economically advantageous tender (Meat).

“Network operators are currently more focused on installation costs rather than whole life cycle costs but specifying the right product for your rail project can make all the difference between trouble-free, longer service life, and a poor performing maintenance-heavy track,” Austin says. “Rail should be a long-term investment. At one test site, the use of HP335 rail had realised a saving of £250,000 in just five years. With results like that, just imagine the savings you could make over the whole life of the track.”