The Russian invasion of Ukraine has wrought devastation across large parts of the country. But the war has also been an impetus for strengthening global support of the country’s railway network and the development of cross-border routes, as David Burroughs reports. 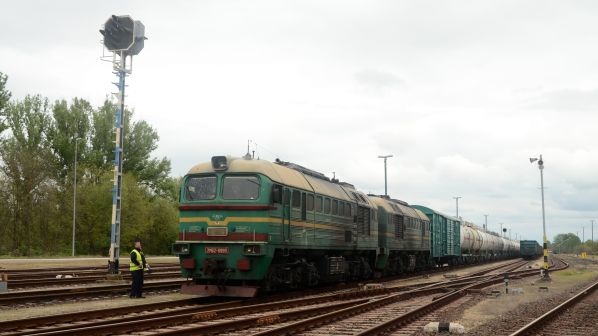 THE railway network in Ukraine has become a symbol of the country’s resilience and ability to continue functioning in the face of Russian aggression. But it has also become an important cross-border lifeline, giving form to Ukraine’s ambition to draw closer to Europe and, ultimately, become a member of the European Union (EU).

The ability of Ukraine Railways (UZ) to continue operating in the face of constant shelling has at times been nothing short of miraculous, and has provided a striking contrast to the issues that cause delays for other railways around the world. This has been highlighted by UZ CEO, Mr Alexander Kamyshin, who has at times gently goaded other railways on Twitter by comparing their issues with his own. For example, Kamyshin responded to a tweet from ScotRail in Britain on December 5 warning passengers of ice on some platforms and pathways by warning Ukrainian passengers of Russian shells on the railways, while affirming his goal to “keep running on schedule.”

While this resilience is largely down to the strength and courage of UZ staff, they have been supported by the international community, especially the countries bordering Ukraine, and the wider EU. This has resulted in efforts to improve rail connections with Ukraine, some of which are stronger now than before the war began.

On May 12, the European Commission (EC) and bordering EU member states established the EU-Ukraine Solidarity Lanes, which aims to boost transit of goods to and from Ukraine using a combination of rail and road. Ukraine sits in a strategic position between Asia and Europe, and also plays an important role as one of the world’s largest grain producers, usually supplying around 45 million tonnes of grain to the global market every year. However, Russia has been deliberately targeting agricultural production and exports, blocking safe passage to and from Ukrainian Black Sea ports and building up stocks in grain silos, which has driven up global cereal prices and created food insecurity.

The volume of grain transport by rail increased by 63% in September, with more than 3 million tonnes for export, up 91.5% compared with August, while almost 322,000 tonnes were carried domestically.

As well as becoming key for global food security, the lanes have become a lifeline for the Ukrainian economy. UZ reported in October that it had carried nearly 11.7 million tonnes of freight in September, 8.4% more than in August. This included 5.8 million tonnes of domestic traffic, down 5.7%, and 5.2 million tonnes of export traffic, up 29.8%. Transit traffic, previously significant due to Ukraine’s strategic position between Europe and Asia, was almost non-existent at 632,000 tonnes.

The volume of grain transport by rail increased by 63% in September, with more than 3 million tonnes for export, up 91.5% compared with August, while almost 322,000 tonnes were carried domestically. Of the export grain almost 902,000 tonnes were transported by rail through land border crossings, while 2.1 million tonnes were exported through sea ports. This is in stark contrast to before the war, when only 1% of grain exports went via land border crossings.

In December, the EC reported that since the inception of the Solidarity Lanes, more than 17 million tonnes of Ukrainian agricultural goods such as grain, oilseeds and related products have been exported by road, rail and through the Black Sea and Danube ports.

An agreement was reached in July to create a protected transit corridor, bringing to an end a five-month Russian blockade of Ukrainian ports to alleviate shortages by allowing exports to resume from three sea ports, reducing pressure on the rail network. The deal was extended by 120 days from November 18, but Russia has at times threatened to halt its support for the corridor, highlighting the importance of reinforcing the land routes.

The ability of Ukraine Railways (UZ) to continue operating in the face of constant shelling has at times been nothing short of miraculous.

However, with these lanes beginning to reach capacity, the EC and financial institutions such as the European Investment Bank (EIB), the European Bank for Reconstruction and Development (EBRD), and the World Bank have announced additional funding worth around €1bn to ensure liquidity for operators, and for repairs and capacity increases.

The EIB plans to invest up to €300m by the end of 2023 on the Solidarity Lanes, on top of the activity already announced and financed in Ukraine, a significant part of which is dedicated to road and railway upgrades.

In addition, the EIB and the EC are making available the technical expertise of EIB’s technical advisory service, Jaspers, for the identification and preparation of cross-border transport projects to be financed under the Connecting Europe Facility (CEF), which can attract potential EIB co-financing.

The World Bank is preparing an emergency project to undertake repairs to the railway and road infrastructure damaged by the war with up to $US 100m targeted for disbursement in 2023. This is in addition to its regional transport modelling, rapid damage assessment to identify priority repairs and recovery investment as well as ongoing work on trade and logistics. Rehabilitation of railway infrastructure and multi-modal logistics in Romania and Moldova to Ukraine’s borders are under discussion to support critical Ukrainian exports and imports, and lay the foundations for reconstruction.

A major obstacle to the integration of Ukraine with the European rail network is the difference in track gauge - Ukraine’s network has been built to Russian 1520mm gauge, while 1435mm gauge is used in neighbouring Romania, Hungary, Slovakia and Poland.

A pre-feasibility study has been launched by the EC together with the EIB to assess how to better connect the Ukrainian and Moldovan railway networks with the EU Trans-European Transport Network (TEN-T). The EC has put forward a legislative proposal to extend four of the European Transport Corridors to Ukraine and Moldova. This includes the extension of the North Sea-Baltic Corridor through Lviv and Kyiv to Mariupol, the extension of the Baltic-Black Sea-Aegean Corridor to Odessa via Lviv and Chisinau, and the extension of the Baltic-Adriatic and Rhine-Danube corridors to Lviv.

As well as support from major international institutions, neighbouring countries have also stepped up to the challenge.

Polish Railways (PKP) says the extremely difficult situation caused by the Russian invasion has brought the long-standing cooperation between the two countries to a new level. At InnoTrans in September, PKP and UZ signed a joint statement to show their intention to continue and expand their mutual cooperation, with UZ the guest of honour on the PKP stand. The two railways are also establishing a joint venture to improve supply chains and deliver goods to customers.

PKP is also improving the capacity of logistic centres and transhipment points at three border crossings, which will increase capacity for and accelerate the repair and inspection of bulk grain wagons.

Action is also being taken to diversify transport routes for goods moving to and from Ukraine, and to increase the availability of rolling stock. PKP has called on Germany to allow the temporary operation of wagons not meeting local noise standards within strictly defined “solidarity corridors,” which it says would improve the availability of rolling stock including grain wagons. PKP subsidiary PKP Cargo is currently discussing this issue with the relevant German authorities.

Work is also underway to optimise the technology used at PKP-UZ border crossings, and there are initiatives to speed up and simplify the border procedures and increase staff numbers.

PKP LHS, which operates the Broad-Gauge Metallurgy (LHS) line from the Ukrainian border at Izow-Hrubieszów to Sławków Południowy near Katowice, has been undertaking an extensive investment project since 2018, aimed at increasing the operational capacity of the line. This includes automation, extending stations to increase capacity, the renovation and extension of track infrastructure, and construction of new lines. These investments have already made it possible to receive more trains across the border.

Further south, Hungary and Ukraine are connected by two lines that run on bridges over the Tisza River, around 7km apart.

The Eperjeske crossing is 1520mm-gauge, and handles the most freight traffic, but currently has no passenger service. The Záhony crossing is dual-gauge, but is primarily designed for passenger trains on the 1435mm-gauge track. The 1520mm gauge here is hardly used but this may change with the increasing cereal traffic and the opening of the East-West Gate (EWG) terminal at Eperjeske.

Work is underway to increase capacity at the Záhony Transhipping Area, one of Europe’s largest inland harbours, which is located southwest of the border crossings. The 8400ha transhipment area has 260km of 1435mm-gauge and 140km of 1520mm-gauge lines. The site has 14ha of outdoor and 7500m2 of indoor storage, and has capacity to handle 18 million tonnes of freight annually.

To cope with the increasing volume of freight moving across the Ukrainian border by rail, work is now underway to reinstate tracks, increase the maximum permitted axleload, increase line speeds from 20km/h to 40km/h and improve lighting to allow work to continue at night. This work includes:

In Romania, UZ conducted the first trial run on the cross-border Rakhiv - Dilove - Valea-Viseului railway on November 8 2022 after Romanian infrastructure manager CFR Infrastructure completed work to upgrade its portion of the route.

Trains last operated on the 1520mm-gauge line 16 years ago. Work by SRCF Cluj, a regional division of CFR, was completed on October 16 and included the replacement of 1400 wooden sleepers and 36 tonnes of ballast while 400 tonnes of new ballast was installed. UZ completed upgrades of the 19.3km section from Rakhiv to Berlebash on the border in August.

UZ hopes to relaunch a twice-daily Rakhiv - Valea-Viseului passenger service in December using DPKr-3 regional trains built in Ukraine. The train will offer a journey time of around 40 minutes and border and customs control will be carried out onboard the train. Passengers will be able to change to standard-gauge CFR services at Valea-Viseului where trains operate to Siget, Cluj and Bucharest.

Regardless of how long the military conflict lasts, the effects of the war in Ukraine are bound to be felt strongly throughout 2023. But so too will the connections and support networks that have been formed to keep Ukraine connected with Europe. These are likely to be just as important to support the rebuilding of Ukraine.