A defining trend in the locomotive market at present is the increasing demand for alternative energy sources and hybrid traction. Quintus Vosman examines some of the latest innovations in this sector. 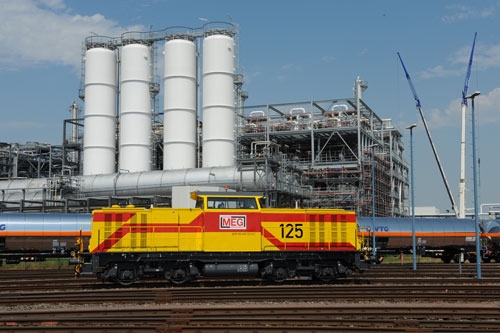 NOT so long ago, the concept of sustainability in rolling stock was essentially interpreted as the need to ensure vehicles were environmentally friendly. But owners and operators increasingly recognise the importance of sustainability to the bottom line, making it an increasingly pertinent aspect of business and product development. The rising cost of fuel means incremental improvements in efficiency can generate major cost savings, and as operators demand lower fuel consumption, locomotive manufacturers are responding with innovative new products.

Alstom has been a major proponent of hybrid technology in the light diesel market and is the first manufacturer to supply a fleet for commercial operations. Now Alstom is poised to launch a new generation of locomotives where hybrid technology is dominant. But not all of the innovation is coming from locomotive suppliers. Operators themselves are experimenting with sustainable technologies on a smaller scale. Dutch infrastructure company Strukton has harnessed the power of the sun by equipping one of its locomotives with a solar panel, and the success of the project has spurred the company's rolling stock engineers to start thinking bigger.

In recent years the Stendal works of Alstom Locomotive Services has specialised in rebuilding many former East German V100 diesel locomotives for a second lease of life. At a time when the liberalisation of Europe's railfreight industry was taking off, these locomotives were a cost-effective way of meeting the traction requirements of the new and small operators that were emerging.

One of the V100s was treated to something a little different. The locomotive was selected to be a testbed for hybrid propulsion, based on a concept Alstom had begun to develop in 2004. A battery, diesel generator, power electronics, and mechanical gearbox were built into the shell of the locomotive. The generator recharges the batteries when not in use and can supply additional power if greater haulage capacity is required. Because the propulsion system does not use energy while idling, fuel consumption can be cut by 40% for an operational cycle with 75% idling time, a major bonus for shunting operations.

The locomotive was completed in 2006 and went on display that year at InnoTrans in Berlin, before undergoing trials with various operators such as Rotterdam Rail Feeding in the port of Rotterdam. It is now at the Volkswagen car plant in Wolfsburg, Germany, where it will operate daily for the next two years.

Giving various operators temporary use of the locomotive not only familiarised potential customers with the technology but gave Alstom valuable feedback on performance and operations. This information was used for further development and product improvement. For instance, in 2007 the battery packs were exchanged with a new more powerful NiCd battery. During operations the battery management control systems were also calibrated.

In 2010 Alstom and DB Schenker subsidiary Central German Railway (MEG) signed a contract for the delivery of five hybrid 600kW V100 diesel-battery locomotives. Initially the locomotives are being leased, but at the end of the contract in 2018 MEG has an option to purchase them outright.

Four of the locomotives were handed over in June and are used at a chemical plant in Schkopau, Germany. Alstom is cooperating closely with the user, checking and monitoring the performance of the locomotives alongside technical teams from German Rail (DB) in an open book policy. The operation of a fleet and the long leasing period means there is much more potential for experimentation and evaluation than with just a single locomotive.

According to Alstom, the benefits of the hybrid V100 include:

• lower noise due to the use of a smaller diesel engine and less idling.

The monitoring and evaluation of this small fleet will play a crucial part in the development of a new generation of hybrid diesel locomotives, a project Alstom launched in 2009.

The decision to develop a completely new locomotive was influenced by a number of factors:

• the hybrid V100 is too large to replace smaller shunters

• market demand for a broader product range, and

• the need to achieve higher levels of performance and efficiency.

This led to the development of the H3 range of three-axle locomotives, which will comprise four sub-types offering varying levels of performance. These include a pure battery locomotive, a 700kW hybrid, a 700kW dual-engine and a 1000kW single-engine locomotive.

All three axles are powered, and Alstom says the three-axle concept makes the locomotives lighter and cheaper to operate and maintain. However, the riding characteristics of three-axle locomotives mean their operations are normally restricted. Research by Alstom, which studied the articulation of the unique Copenhagen S-Train emus, made it possible to design a long locomotive with three axles capable of running at up to 100km/h - essential for mainline operation - while retaining the ability to negotiate 60m-radius curves. The one-motor one-axle balance gives the locomotive a tractive effort of 240kN, which is considerably higher than the hybrid V100 and indeed any three-axle shunter currently on the market.

"A hybrid locomotive is more expensive to buy, but reductions in operating costs compensate for this," explains Mr Klaus Hiller, managing director of Alstom Locomotive Services. "We estimate fuel savings per locomotive to be around 25,000 litres per year. Normal modern diesel shunters consume around 16 litres per hour. The Alstom hybrid saves seven litres of fuel per hour, and a diesel locomotive runs for an average of 4000 hours per year. The savings on mainline operation are also considerable."

Another major selling point is the ability to operate with zero emissions in restricted areas such as depots and tunnels. Low noise operations are possible both in battery and genset mode.

Compatibility is another important consideration and the different versions of H3 will be capable of operating in multiple in different modes under the control of a single driver. This means a locomotive could haul a train under diesel power with a second unit providing assistance under hybrid or battery power.

Alstom sees significant demand for such locomotives. "In Europe there are around 3000 diesel locomotives rated below 1000kW," says Hiller. "Most of them are old and need to be replaced. Energy is getting expensive and with more restrictions on noise and CO2 emissions, the H3 platform has a lot of potential. We are sure we have chosen the right concept, as we see demand for heavy diesels declining."

On July 17 a letter of intent was signed between Volkswagen and Alstom for the delivery of four H3 hybrid locomotives, which will be used for shunting at the Wolfsburg plant from 2014. Further letters of intent and even firm contracts are expected to be signed at InnoTrans this month.

In the Netherlands, Strukton Rail Equipment, a subsidiary of infrastructure maintenance and construction company Strukton Rail, has started a trial to use solar energy in its rail vehicles. Engineer Mr Pascal Slapman was inspired by solar panels and developed a concept for the installation of photovoltaic cells on a locomotive. The project won the support of Strukton's managers, who decided to put the technology to the test on one of the company's diesel locomotives.

A four-axle Deutz 1200BBM 808kW centre-cab diesel locomotive built in 1963 and named Janine was selected for the trial and was fitted with a solar panel. The panel is positioned on the hood to ensure light is not blocked by trailing smoke from the exhaust which might restrict the performance of the cells. The size of panel is 192cm x 99cm x 5cm. It delivers 280W at 24V which passes directly to the batteries.

"There are many good reasons why we should investigate what solar energy can do for our trains," says Mr Ben Kosse, head of the technical service department at Strukton Rail Equipment. "Sustainability has become an important issue in contracts for railway construction and maintenance in the Netherlands. Energy saving and environmental friendliness are important considerations for [infrastructure manager] Prorail, and neglecting this would harm our chances of winning new contracts. Strukton also sees sustainability as a way of increasing efficiency and cutting costs, and the solar panel trial also demonstrates our commitment to these goals."

The trial has four key objectives:

Although testing is due to continue until the end of next month, Janine has already demonstrated some important advantages of this technology. Kosse points out that the availability of the locomotive has improved. "The locomotive is used for infrastructure works, which means usage patterns are irregular," he says. "This means the batteries might drain when not in use. With the solar panel, the batteries are permanently recharged. The trial started during cold winter conditions, and since then - despite low temperatures - we have not needed to change the batteries."

The batteries are not only used for starting the locomotive, but also for powering auxiliary equipment. More and more equipment had been connected to the battery when the engine was switched off. The solar panel was able to recharge the battery quickly in most situations.

With higher reliability comes a reduction in operating costs. Strukton no longer needs to allocate staff time to locate the locomotive and replace batteries after periods of inactivity.

The need for new batteries has also declined since the solar panel trial started. The data will be evaluated over the next few months following the completion of the test phase and may prompt Strukton to equip the rest of the locomotive fleet with solar panels.

Strukton is looking to further exploit the potential of solar panels on its rolling stock, in particular on track maintenance vehicles, which are heavy users of battery power. Depending on the results of the trials, Strukton may introduce solar panels on track machines from next year, and the equipment will be installed during overhauls or heavy maintenance.