A new fleet of trains, including some powered by batteries, are central to plans to transform rail travel in Ireland by the end of the decade, as Richard Clinnick reports. 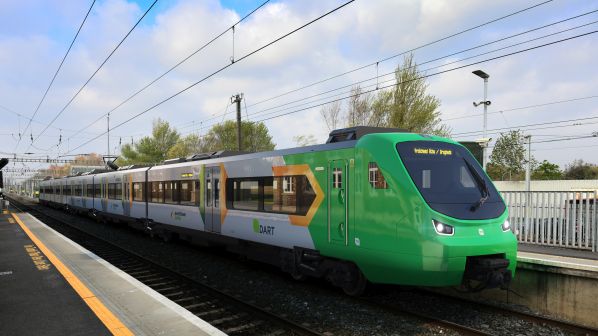 The IÉ X’trapolis fleet will be a mixture of five-car EMUs and BEMUs, with deliveries due to commence in 2024. Photo: Alstom

SUSTAINABILITY is key to the expansion plans for Ireland’s railway. Central to this is an order by Irish Rail (IÉ) with Alstom for up to 750 new EMU and BEMU X’trapolis cars, with 325 destined for the Dublin Area Rapid Transport (Dart) network, and the remaining 425 for the rest of the country.

The order was announced on December 13 and the 10-year framework contract includes an initial order for six five-car EMUs and 13 five-car BEMUs worth €318m. This also includes a 15-year support services contract. The new trains will be built in Katowice, Poland, and commissioning will be carried out at Inchicore with support from British engineering teams based in Derby. The plan is for the first sets to enter operation in 2025.

The fleet order is one of five separate but complementary projects in the Dart+ Programme, which is funded by the National Transport Authority (NTA) under the National Development Plan 2021-2030. The preliminary business case for the Dart+ Programme received approval from the Irish government on December 7. When complete, this project will double hourly passenger capacity to 52,000 and treble the length of the Dart electrified network to 150km.

IÉ chief executive, Mr Jim Meade, says there is an expectation that the full order will be fulfilled, and that the plans were actually conceived in 2018. The orders are expected to be placed in line with the delivery of the Dart+ Programme, and will satisfy the need to replace the current Dart fleet, which dates from 1984, later in the decade.

Meade, who took over as chief executive in 2018 having previously been director of operations, and his IÉ team had been busy evaluating what technology was available at the time as well as looking at what future opportunities could deliver, ultimately deciding that they should move away from diesel.

These plans were being devised in the pre-Covid era, and IÉ was tasked with producing a strategy that would map out investment and expansion plans through to 2027. With passenger numbers on commuter services in particular growing steadily to such an extent that it was foreseen that passengers would be left behind on platforms by 2022. The plan worked on the assumption of the annual growth of around 5% recorded prior to the pandemic. However, Covid has dented this growth, but with passengers expected to return, its scope has been extended until 2030.

The Dart+ Coastal project includes extending the electrification of the Greystones - Dublin - Malahide line northwards. The 37km section between Malahide and Drogheda will be electrified at 1.5kV dc while the infrastructure will be upgraded to support the new fleet. Construction is due to commence in 2024 and be completed in 2027.

The ambition is to double the commuter capacity and treble the electrification of the Greater Dublin Area rail network. The overall Dart+ programme will electrify the 40km Dart+ West line to Maynoorth and M3 Parkway, with this part approved by the Irish government last December. The 20km Dart+ South-West from Dublin to Hazelhatch will follow that, with all the lines expected to be electrified by the end of the decade.

Meade says a key belief was that a better strategy was required for IÉ’s fleets. This would involve assessing what was currently being operated and creating a major plan. This was where the plan for new trains was devised.

The X’trapolis trains will be a 1600mm-gauge 1.5kV dc fleet. Each train will be 82m-long and have capacity for 550 passengers. They will be articulated and will be fitted with open gangways, low level flooring and automatic retractable steps. Dedicated cycle and family areas, charging points for mobile phones, e-bikes and e-scooters, and advanced CCTV will be installed throughout. However, they are not being fitted with toilets.

“I think we look at Ireland and we can see it’s a growing market. We know there are plans that have been around for a long time, for example around Dublin, that have never materialised.”

The initial BEMU order will operate on the Drogheda - Dublin northern commuter services, while the EMUs will operate on the existing Malahide/Howth - Bray - Greystones Dart services to boost capacity. This will enable a cascade of trains to other commuter and inter-city routes.

The trains are a mixture of EMU and battery-electric-hybrid units. Although trials of hydrogen power were underway in Europe when IÉ was devising its fleet strategy, this was not considered an option at the time as the technology was not believed to be developed enough at that stage. “We didn’t want to be a test bed,” Meade says. However, he does expect hydrogen powered-trains will operate in Ireland in the future.

The BEMUs will have the ability to operate between 80km and 100km away from overhead electrification. Lithium-ion batteries will be fitted to the driving vehicles, located on the roof. By positioning them there, Alstom is able to deliver a more spacious and accessible interior.

The energy from the batteries will be replenished via fast charging stations at selected terminus locations and via regenerative braking. There will be more opportunities to charge the batteries as more electrification is introduced.

As the technology improves Meade says IÉ will consider discontinuous electrification and suggests that this could be used in regional cities such as Cork and Limerick where the new trains will be deployed over time. The plan is for electric trains to operate across the entire network, including using alternative power where there are no overhead wires. He says commuter lines around Cork to destinations such as Cobh and Midleton - around 24km away - would be ideal for BEMUs.

Delivery of the full plan is dependent on Irish government funding. There is cross-party support for the railways, and Meade points out that the minister of transport is a member of the Green Party. The plan is for a 2:1 spend on public transport over roads.

Any options for extra trains beyond the initial 19 that are exercised can be delivered quickly as the main work, including design and testing, will have been carried out on the initial order. “The ideal situation is we’d like to have a continuous build,” Meade says.

Like any other operator, IÉ has been affected by the pandemic. However, Meade is choosing to treat the situation positively. He says Covid-19 has given IÉ the opportunity to build capacity ahead of demand. “Usually you chase demand,” he says regarding train orders in the past. “One thing is for sure the demand will come back.”

Indeed, Meade is adamant that passengers will return, claiming that there is a slight difference in how the railways are used compared with Britain where less than 75% of the commuter market has returned, leading to decisions being made to reduce services and remove fleets from traffic. Currently Dart usage is at around 60% of pre-Covid levels and leisure is at 75%.

Meade says a generation of new rail users is emerging. He says that with Dublin’s roads increasingly congested, the cost of living including the cost of fuel rising, and a new realisation of the environmental benefits of using public transport is driving growth on the Irish network.

But travel will be different, says Meade. People will not want to pack into trains when they do return. “And that won’t happen,” he adds. Before Covid trains were carrying six people per square metre, but the expectation is that will reduce to four people. The design of the interiors on the new trains, which will be more spacious, will help achieve this.

Alstom customer director, rolling stock, UK & Ireland, Mr Piers Wood, says that while other facilities were considered, the decision to build the trains in Katowice was taken because the X’trapolis production line is in situ and it made sense to continue production of the trains at this site.

There are differences from other fleets manufactured at the site, such as the 1600mm-gauge. However, the design is modular with the interiors, motors, cab and doors all of the same design as X’trapolis trains delivered elsewhere.

Wood says construction will start in 2023, with the first cutting of metal expected in the middle of the year. The first two trains are expected to be delivered to Inchicore Works in mid-2024, entering traffic around a year later.

A decision on how testing will be conducted has not been confirmed, but the gauge presents problems as to where this can be undertaken, so the trains will be sent straight from Poland to Ireland following the completion of static testing at Katowice. When the trains are shipped, they will be split into individual cars with individual bogies and then reformed once delivered to Inchicore Works.

As for when decisions will be made on future orders, Wood says that that is very much up to the customer. However, there is an element of fixed costs that amortise across the initial order meaning future orders could be up to 50% cheaper than the initial 19 trains.

There will have to be management of any delays while future orders are awaited; Wood, like Meade, is confident that future orders will come. “I think we look at Ireland and we can see it’s a growing market,” Wood says. “We know there are plans that have been around for a long time, for example around Dublin, that have never materialised.”

Meade also says that there are plans to improve capacity in cities across the country.

There are also ambitious plans to work with offshore wind farm companies to source renewable energy. Meade says that IÉ is looking at the Irish and Celtic seas as areas to generate power. There is a desire to buy electric locomotives to haul freight trains, and that by generating its own power, as well as using emissions-free passenger trains, he says IÉ would be “green at every point.”

IÉ has a clear plan in how it will make rail more attractive in a post-pandemic world. The new train fleet and electrification are key to this. The confidence of customer and client when it comes to future orders suggests that Irish rail passengers will soon be enjoying a modern, reliable and green railway.