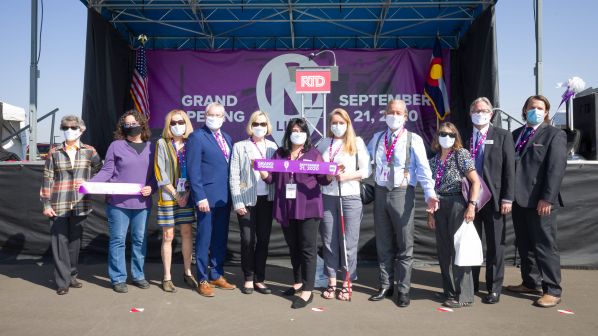 The line connects Denver Union Station via Commerce City and Northglenn to 124th Avenue in Thornton and offers an end-to-end journey time of 29 minutes. The north-south line also features five stations and 2480 dedicated park-and-ride spaces along the route.

The line was constructed by a consortium of Graham Contracting, Balfour Beatty and Hamon Constructors under a $US 343m design and construction contract awarded in November 2013.

The line is operated by a fleet of 25kV 50Hz ac Hyundai Rotem two-car EMUs capable of operating at speeds of 125km/h. The trains are part of an order for 66 cars purchased by RTD for use on the city’s A, B, G and N commuter lines.

Phase 2 will extend the N Line 8.8km north from Thornton to a new terminus at the interchange of State Highway 7 and 162nd Avenue in North Adams County, with two additional stations. This section of the project is currently unfunded.

Work on the N Line began in 2014, with an initial opening date planned for January 2018. The project was later delayed to the first quarter of 2020, but was again postponed due to the coronavirus pandemic.

Due to Covid-19, RTD will operate services on the N Line at a reduced frequency of 30-minute intervals. The line is expected to serve a daily ridership of 8100 passengers for the duration of the pandemic, down from pre-Covid estimates of 9500 passengers per day.

RTD is offering free travel on the line for the first week of operation, followed by a promotional price of $US 3 for a one-way trip from September 28 for the next six months.

The line is part of RTD’s voter-approved FasTracks programme to expand public transport in the Denver area, through six new light rail and commuter rail lines with a combined length of 196km.