Poland: PKP has awarded Ferrovial’s Polish subsidiary Budimex a €433m contract to redevelop the Warsaw West station which handles around 60,000 passengers a day, with this number expected to double by 2030. 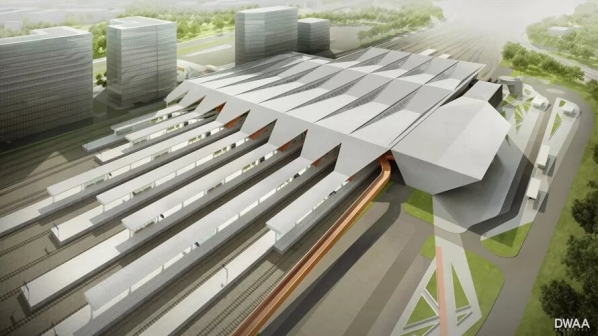 The Warsaw West redevelopment includes replacing 30km of track, 130 switches and the overhead electrification, and will take until 2023 to complete. The project will include the construction of new platforms and a modernised station hall, which will increase capacity and improve the comfort of travelling for passengers, as well as a new track layout.

A new underground light rail platform will be built at level -2, to allow for a future connection between Warsaw West and Wola.

International: A rail crossing over the River Odra on the Polish - German border in Kostyrzyn has secured planning permission.

The 266m bridge will form the central part of the 1.3km Berlin - Kostrzyn - Gorzów railway modernisation programme. The bridge will include a 130m arch and will replace a single track truss bridge built before the Second World War.

The bridge was designed by Knight Architects and Schüßler-Plan Berlin following a two-stage limited design competition. A second smaller bridge, the Odervorflut, will cross a flood-relief canal located 500m west of the main crossing, and will use similar architectural features as the main bridge.

New Zealand: Regional economic development minister, Mr Shane Jones, has announced the preferred site of the 2.5km-long inter-modal freight hub, which will be located between Palmerston North Airport and Bunnythorpe.

Mr Greg Miller, the group chief executive of national railway KiwiRail, says the Regional Freight Hub has the ability to attract between $NZ 2bn ($US 1.3bn) to $NZ 4bn of logistics investment into the area, while servicing the entire central and lower North Island. The site will include capacity for a log yard, bulk freight silo, container terminal including free trade zone capability for exports, significant warehousing for freight partners, and KiwiRail’s operations.

Design, consenting, and acquisition of land for the hub is being funded through a $NZ 40m investment from the government’s Provincial Growth Fund. KiwiRail will finalise the design of the hub and expects to begin the process to have the land designated for rail use from around September.

Czech Republic: Infrastructure manager SŽ has announced a tender to update the documentation for the zoning procedure that will allow the construction of the new double-track Prague-Smíchov - Beroun line.

The contract is worth around Koruna 160.5m ($US 7.2m). The line will start at Prague-Smíchov before running through a 24.7km, 200km/h tunnel between Barrandov and Beroun. The line will then continue with an overpass over the Berounka valley. On the Prague side of the tunnel, a branch will be built to Prague-Krč, while a branch for the new adjoining high-speed line in the direction of Hořovice and Plze will be developed on the Beroun side of the tunnel.

Construction on the tunnel is expected to begin in 2028, with completion due in 2042. The line will reduce Prague-Smíchov - Beroun travel times to about 12 minutes.

New Zealand: Construction has started on the Karangahape underground station for Auckland’s City Rail Link (CRL), which will become the country’s deepest station at 30m. Work has begun following five months of demolition work and another four months of preparatory work at the Mercury Lane site.

A “hydrofraise” machine is being used to make narrow cuts in the ground that will eventually be filled with concrete for the “diaphragm” walls, some of which are 35m below ground. After the installation of the diaphragm walls, the roof and supporting columns will be built before the dirt is removed for the station’s concourse and platforms.

Karangahape station will connect with tunnels to the Mt Eden, Aotea and Britomart stations, before linking up to Auckland’s wider rail network when the CRL opens in 2024.

Egypt: Nexans has completed the delivery of 1700 km of specialised signalling cable to Alstom for the Beni Suef - Asyut (BSA) project in Egypt. The cable was developed and manufactured by the Nexans plant in Tuzla, Turkey.

The BSA project was initiated by the Egyptian Ministry of Transport as part of the national investment in the area parallel to the Nile river south of Cairo. The 250km line is an important connection between the cities of Beni Suef and Asyut. The project will modernise signalling systems on the Egyptian National Railways (ENR) network to improve passenger safety while capacity by more than 80%.

Nexans Tuzla carried out a special cable development project to meet the specific technical requirements of Alstom and ENR. This produced a specialised, cost-effective cable design that offers water resistance without using a petroleum gel filler as well as the flame retardant properties which ensure the safety, crucial for this railway application.