Line is now 96% complete but additional safety checks of driverless trains are being carried out. 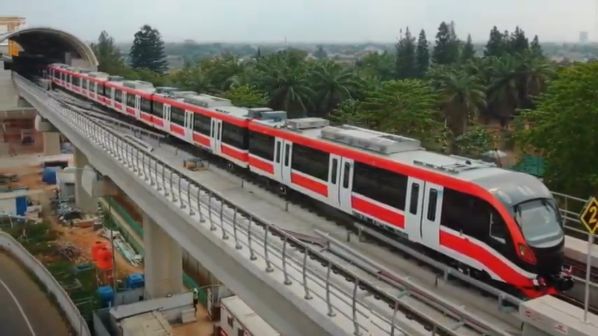 THE Indonesian capital’s new light metro line, which will connect Jakarta city centre with the Greater Jakarta districts of Bogor, Depok and Bekasi, will finally open in June 2023, the president director of state-owned construction company PT Adhi Karya, Mr Entus Asnawi Mukhson, has announced at a hearing of the country’s House of Representatives and Ministry of Finance.

The line, still under construction but now reportedly 96% complete, is formally known as the Greater Jakarta LRT, but more popularly as Jabodebek LRT as this title takes elements from the names of the district through which the 44.4km line passes.

The first of 31 six-car driverless EMUs being supplied by PT Inka, Indonesia, for the Jabodebek metro project arrived in Jakarta in October 2019. The Jabodebek trains, which can each accommodate around 1500 passengers, are designed to operate at Grade of Automation 3 (GoA3) - the first time this driverless technology has been employed in Indonesia. Operation and control are conducted via a system centred on an 11-hectare depot complex in East Bekasi. However, cabs are provided at each end of a train so operation can be monitored by a crew member.

On October 25 last year, a collision occurred during testing of two trains between Harjamukti and Ciracas stations. Equipment involved in the collision was badly damaged and a driver who was on board suffered minor injuries. Indonesia’s National Transportation Safety Committee (NTSC) later attributed the incident to human error due to a driver playing with his mobile phone. However, news of the incident spread via social media resulting in the need for additional reassurance over train safety for the benefit of the public.

The new line has been a long time coming. The Jabodebek route was initially planned in the early 2000s as a monorail project and construction started on that basis in 2004 before immediately stalling due to insufficient funding. The monorail scheme was revived in 2013 but then stalled again in 2014 and then was dropped altogether in 2015 due to various disagreements.

The decision was then taken for PT Adhi Karya to adapt the infrastructure which had already been built as for light metro operation, as this would have a higher passenger capacity, simpler switching systems and lower maintenance costs than a monorail.

Construction of the Jabodebek line as a light metro project was initially approved by President Joko Widodo in September 2015. Phase 1 will run from Dukuh Atas, where it will interchange with the underground metro and commuter rail networks, via Kuningan, to Cawang, where the line splits with one branch running east to East Bekasi and the other running south to Harjamukti Cibbur.

The elevated standard-gauge line is electrified at 750V dc third rail. It will have moving block signalling designed for headways of 2-3 minutes. The contract value for the railway project amounts to Rupia 23.3 trillion ($US 1.5bn). Mukhson told the House of Representatives that this meant there was more or less a project budget of Rupia 500bn ($US 33m) per km.

Jakarta has a 1435mm gauge light rail line - LRT Route 1, from Pengangsaan Dua in North Jakarta to Velodrome in East Jakarta, which uses smaller Hyundai Rotem trains built with aluminium car bodies to reduce weight and power consumption. Part of it was intended to open in time for the August 2018 Asian Games being held in Jakarta, but the construction team missed this deadline and a public trial of the new line only took place in June 2019, with commercial operation beginning in December of that year. However, since then LRT Route 1 has reportedly seen falling ridership.

Special efforts are being made to integrate all the modes of public transport in Jakarta to ensure swifter travel across the capital with ease of connection between different types of rail lines and other modes of transport.

For more detailed data on metro projects and fleet orders in Asia, subscribe to IRJ Pro.