The North Line modernisation project is part of ÖBB’s €2.9bn planned investment in 2022. 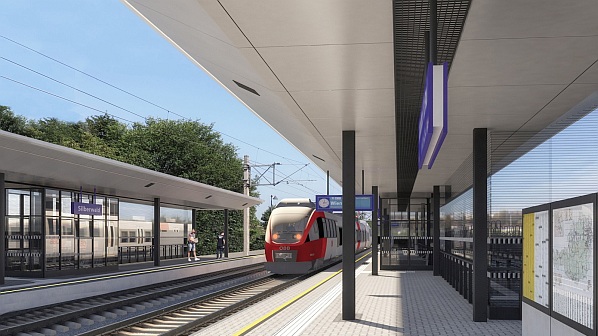 The modernisation of Vienna Süssenbrunn station is due to be completed by the end of 2022.
Photo Credit: OBB.

AUSTRIAN infrastructure manager ÖBB-Infrastruktur has started construction work on a project to modernise the line between Vienna and Břeclav in the Czech Republic, which will reduce Vienna - Prague journey times and increase capacity for Vienna S-Bahn services.

The €70m project is part of a planned €870m investment in the country’s eastern region in 2022. ÖBB plans to invest €2.90bn across its network this year, as part of its €18.2bn five-year investment plan in the rail network that was announced on November 3.

The North Line project involves upgrading the track, modernising overhead catenary and safety systems on the 66km route, which ÖBB says will benefit both long-distance and commuter services through increased line speeds.

There are plans to remove 18 level crossings and modernise 17 stations. Journey times will be improved, both domestically and internationally, with services to Prague expected to take 3h 45min.

For more data on infrastructure projects in Europe, subscribe to IRJ Pro.