IRJ editor-in-chief, Kevin Smith reflects on the post-war path for Ukraine and UZ. 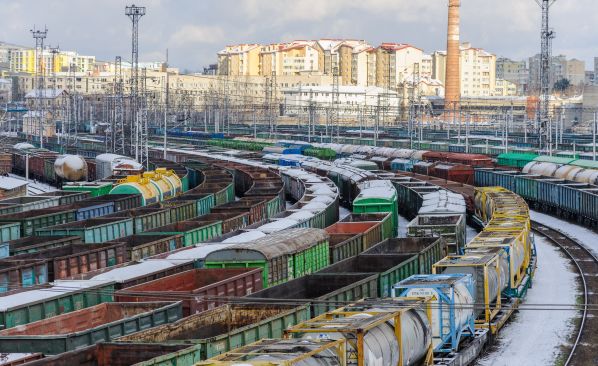 More than 1 million tonnes of freight have been carried since the start of the conflict in Ukraine.
Photo Credit: Shutterstock

DRESSED entirely in black, carrying a backpack on both shoulders, and with his hair tied back in a top knot, Mr Alexander Kamyshin, the CEO of Ukrainian Railways (UZ), stood out from his peers from other European railways at September’s InnoTrans exhibition in Berlin. But then UZ is unfortunately not your conventional railway.

Eight months since war broke out, Ukraine’s railway remains a lifeline to the country. Kamyshin’s Twitter feed documents daily efforts by UZ to #KeepRunning trains across the 40,000km network as close to schedule as possible. Photos of track inspections and repairs offer a stark reminder of the challenges UZ faces following the latest Russian bombardment, sometimes with tragic results for the 8000 or so Ukrainian railway men and women tasked with restoring track and other infrastructure and relaunching trains.

Kamyshin told the InnoTrans opening ceremony that 244 UZ workers had been killed and 425 injured since the start of the war, stating that his staff experience shelling every day. Kamyshin was greeted as a hero everywhere he went at InnoTrans, and quite rightly so. His leadership and positivity in the face of the utmost adversity is an inspiration.

Kamyshin highlighted Ukraine’s status as a European Union (EU) candidate country while in Berlin and the importance of the railway to speed up this integration. “Joining the EU for UZ will not only bring resilience, but huge opportunities in cargo, passenger and infrastructure,” Kamyshin said. “I am sure that Ukraine joining Europe will help Europe make its railways great again.”

Memorandums of Understanding (MoUs) signed with Kamyshin’s counterparts Mr Krzysztof Maminski at Polish State Railways (PKP) and Dr Richard Lutz at German Rail (DB) reflect this desire. The agreement with DB specifically targets improving freight flows between Ukraine and Poland and onward to Germany. DB is also prepared to support with the post-war reconstruction of Ukraine and to reform UZ’s corporate structure.

Supporting the railway is crucial to maintain the country’s most important export sector: agriculture. According to the European Commission, Ukraine accounted for 10% of the world’s wheat market along with 15% of corn and 13% of barley before the war. It is also the global leader in sunflower oil, with a 50% total share.

Maritime has traditionally been responsible for the vast majority of exports with rail essential for moving commodities to ports - rail carried 314.3 million tonnes of freight in Ukraine in 2021, including 33.6 million tonnes of grain. However, flows slumped as Black Sea ports were closed in the days after the Russian invasion, leading global prices to surge and concern to grow in the Middle East and Africa, some of the largest recipients of Ukrainian grain.

Three ports reopened in July following a truce brokered with Moscow by Turkey and the UN, while the EU’s Solidarity Lanes policy sought to provide the necessary capacity to move products west overland. Exports have since surged: Ukraine exported 10.8 million tonnes of grain in the 2022-23 season up to October, compared with 16.5 million in the same period in 2021-22. UZ has also reported record export freight growth of 30% in September to 5.2 million tonnes with grain responsible for 3 million of this total.

It looks unlikely that these flows will be maintained in the short-term. The upturn is largely credited with clearing a backlog from the bumper 2021 harvest and unsurprisingly the 2022 yield is expected to be significantly reduced. However, UZ’s growing export rail freight flows hint at medium to long-term opportunities for rail.

Kamyshin regularly bangs the drum to improve border capacity and ease the transfer of goods between 1520mm and 1435mm gauge and various projects have emerged in recent months to meet this need.

In Poland, PKP has converted higher capacity UZ wagons to standard gauge to support the transport of grain. New terminals at Mostysja, Zamośand Sosnowiec are also providing a much-needed boost in capacity while work has taken place to speed up and simplify border procedures. A project underway since 2018 by PKP LHS to improve capacity on the LHS 1520mm-gauge single-track line, which runs from the Ukraine-Poland border at Izov-Hrubieszów for 395km to Slawków, is also showing its worth. The line has carried more than 1 million tonnes of freight since the start of the conflict.

In Hungary, the new East-West Gate terminal, located south of the border crossing of Zahony, opened last month. It has capacity for 1 million TEU and is expected to handle up to 600,000 tonnes of grain per year. In addition, the Hungarian government has approved €30m of funding to improve rail capacity at Zahony. MAV will complete work this year.

In Romania, CFR Infrastructure reopened a broad-gauge line from the Danube port of Gati across the border to Giurgiulesti in Moldova in July, enabling through trains from Ukraine to reach Romania. UZ has upgraded infrastructure to the disused cross-border lines of Rakhiv-Berlebash and Teresva-Câmpulung la Tisa and Kamyshin has urged his Romanian counterparts to do the same to enable freight to flow across the border.

In Moldova itself, a 22km line between Berezyne in Ukraine and Basarabeasca reopened after 23 years in August while studies are underway by the EU to potentially extend standard-gauge infrastructure from Poland and Romania into Moldova and Ukraine.

This work is part of the EU’s longer-term TEN-T strategy, which is likely to see millions of euros invested in Eastern Europe to boost the railway network’s capacity and resilience in the coming years. Times are certainly troubled for Ukraine at present and with both sides digging in, there is no clarity on when and how the conflict might end. Kamyshin’s vow to #KeepRunning is both a show of defiance and a promise of a better future. Long may it continue.