THE mayor of Paris, Mrs Valérie Pécresse, and French transport minister, Mrs Elisabeth Borne attended a ceremony in Courbevoie, Paris, on November 28 to officially name Europe’s largest tunnel boring machine (TBM), which will be used to excavate a tunnel for the €3.8bn western extension of RER Line E. 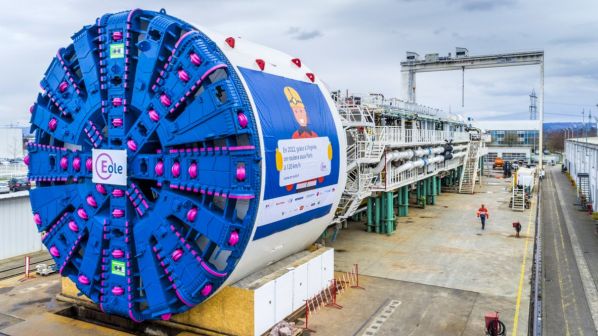 TBM Virginie is 90m long, weighs 1800 tonnes and has an 11m-diameter cutting disc. The machine will operate six days a week, digging and lining up to 15m of tunnel a day at depths of up to 40m.

The 8km tunnel from St Lazare to Nanterre-la-Folie is a key component of the Eole project, which also involves upgrading the existing 47km line to Poissy and Mantes-la-Jolie. The extension will cut journey times between western suburbs and La Défense, an important commercial centre on the west side of Paris, by up to 17 minutes.

It will also provide existing Line E passengers with direct access to La Défense, and will relieve congestion by between 10 and 15% on the Auber - La Défense section of RER Line A, which Line E will parallel, and part of RER Line C.

Line E services will be extended to Nanterre in 2022 and Mantes-la-Jolie in 2024. Ridership is forecast to increase to 650,000 passengers per day when all phases of the project are complete.

Capacity across the core section of Line E will be increased from 16 to 22 trains per direction per hour with the introduction of CBTC, while a new fleet of RER NG trains will be delivered from 2021 onwards.

For detailed data on commuter rail projects around the globe, subscribe to IRJ Pro.