CHINA Railways Corporation inaugurated its new standard high-speed EMU, which has been under development since 2012, on the Dalian – Shenyang line on August 15. 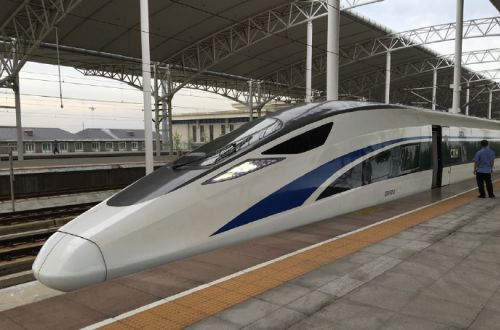 The train has a maximum design speed of 350km/h and achieved 420km/h during test runs on July 15 when two trains passed each other at the this speed on the new 363km Zhengzhou - Xuzhou high-speed line which is due to open on September 10.

Research and development of the standard EMU started in 2012, enabling the general technical specifications to be completed in December 2013 and the design to be finalised in September 2014. The new trains were unveiled at the China Academy of Railway Sciences' (Cars) test loop line in northeast Beijing on June 30 2015 where they were tested at up to 160km/h. High-speed trials were conducted on the Datong – Xi’an and Yuanping – Taiyuan lines between September 2015 and May 2016 before the two trains moved to the Zhengzhou – Xuzhou line.

Each 209m-long train comprises four motor cars and four trailers. The trains are 3360mm wide and 4060mm high and have an axleload of less than 17 tonnes. Each train can accommodate 556 passengers, with 10 in business class, 28 in first class, and 518 in second class.

Chinese Railways Corporation coordinated the project, while Cars was responsible for developing the overall technical specifications, and CRRC Changchun Railway Vehicles and CRRC Oingdao Sifang were responsible for the design and manufacture.

“China independently owns the design of the EMU, and it will be a leading model for China to export to the world,” says Mr Zhou Li, head of technology with China Railways Corporation.