The Czech Republic currently has planning tenders out for two high-speed lines. 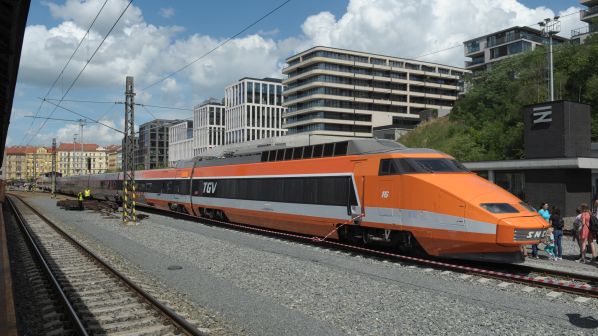 The TGV was displayed in Prague.
Photo Credit: Quintus Vosman

CZECH infrastructure manager SŽ has promoted the next phase in the development of a high-speed network across the country with a visit of a TGV high-speed train to Prague. The arrival of the 42-year-old train, which set a world speed record by travelling at 380km/h on the Paris - Lyon high-speed line on February 26 1981, symbolised the close cooperation between SŽ and its French counterparts during the planning of the high-speed network.

SŽ is currently preparing two 350km/h lines, with plans for further lines under consideration. The priority is the construction of a 200km line between Prague and Brno, the Czech Republic’s two major cities. SŽ currently has two tenders open to provide spatial planning and environmental impact studies for the line, while a modern high-speed station in the east of Prague is also being designed.

The second line will run north from Prague to Ústí nad Labem, before continuing through a tunnel to the German border. The line will be built through a cooperation agreement between SŽ and German infrastructure manager DB Network. The government of the German state of Saxony strongly supports the line and is pressuring the German federal government to invest in the connection.

Both lines are of major international relevance in Central Europe, in particular for Berlin - Prague - Brno - Vienna/Bratislava - Budapest services, but also for trains operating via Brno to Ostrava and Krakow. A dedicated high-speed line will also relieve congestion on the conventional network. The high-speed network is expected to be open to all operators in the Czech Republic.

SŽ CEO, Mr Jiři Svoboda, said the TGV visit marks the start of a new phase for the development of high-speed rail in the Czech Republic, and reiterated the need to identify funding for the network. The Czech Republic intends to seek funding from the European Union and the European Investment Bank (EIB).

Construction is expected to begin on the Prague-Běchovice - Poříčany section at the end of 2025 or early 2026, with construction of the sections in Central Bohemia and near Brno to begin in 2027. The construction of a line through the Vysočina region is due to start in 2029.

“This is the largest infrastructure plan in the history of the independent Czech Republic with an estimated cost of approximately Koruna 700bn ($US 30.2bn),” Svoboda says. “The arrival of the TGV set is a symbol as well as a means of bringing the process of preparing new lines to the public and passing on the details that people expect from us.”