THE LRTC Consortium has completed phase 1 of the turnkey Light Rail Transit (LRT) project in Lusail, a planned city currently under construction near Doha, Qatar. 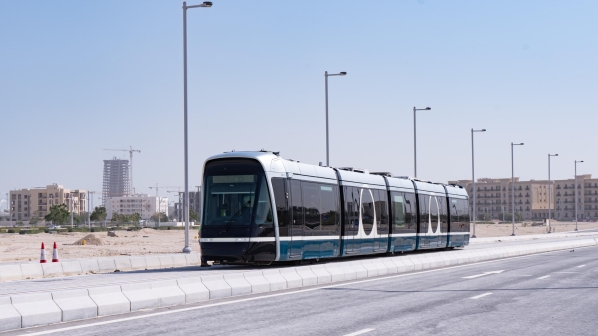 The first phase includes 9.7km of single-track catenary-free line and 12.8km of single-track underground line. The line has 16 stations, an interchange with Doha metro red line, a depot and a viaduct across the Al Khor Expressway.

Covering 35km2, Lusail is expected to eventually become home to around 260,000 people. The full Lusail light rail network will have three lines over 37km with 28 stations.

Qatar Railways Company awarded the LRTC consortium a €2bn contract in 2014 to supply the turnkey light rail system. The consortium comprises Alstom (40%) and QDVC (60%), a Qatari shareholding company in charge of civil works which is held 51% by Qatari Diar Real Estate Investment Company and 49% by Vinci Construction Grands Projects.

Alstom’s share of the contract is worth €750m and includes rolling stock, catenary and catenary-free technology (APS), signalling and platform screen doors.

The 28 five-car Citadis low floor LRVs supplied by Alstom can operate with both catenary and APS, with capacity for 209 passengers, and are equipped with a full electrical braking system and LED lighting. Both the vehicles and stations are equipped with passenger information and security systems.

The APS system uses 11m segments set into the track bed to supply current to vehicles, which automatically switch on and off depending on whether an LRV is passing over them.

The LRTC consortium awarded Thales a contract in 2015 to deliver an integrated supervision, telecommunications, security and automatic fare collection system for the network.

In 2016 Qatar Rail awarded a Riyals 151.6m ($US 41.6m) project management contract to a joint venture of Astad, Hill International, and Italferr. Atkins carried out preliminary design work for the project.