BRITISH infrastructure manager Network Rail (NR) has announced that the Aberdeen - Dundee main line will reopen on November 3 after repairs following a fatal accident on August 12. 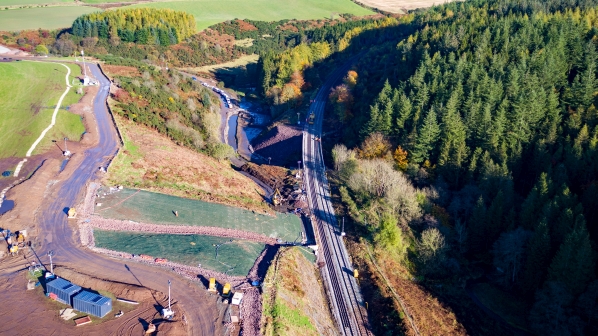 The incident at Carmont, near Stonehaven, caused extensive damage to the track, bridge, embankments and drainage systems.

NR says its engineers have been working around the clock since the incident, initially supporting the accident investigation before beginning work in September to recover the derailed coaches and repair and reopen the line.

This work has included:

“We continue to work closely with accident investigators as we seek to learn the lessons of this tragedy and make our railway as safe as possible for our people and our passengers,” says Mr Alex Hynes, managing director of ScotRail.

“Our thoughts continue to be with the families and friends of Brett, Donald and Christopher and with the other passengers and colleagues who were affected by the accident.”

NR introduced a range of additional safety measures following the incident, including inspecting hundreds of sites with higher-risk trackside slopes across Britain. These inspections were carried out by NR’s in-house engineers and specialist contractors, supplemented by helicopter surveys.

NR has also launched two taskforces, led by independent experts, as part of its long-term response to climate change and the challenge of maintaining its massive portfolio of earthworks including embankments and cuttings, many of which date from the 1800s.

Dame Julia Slingo, the former chief scientist at the Met Office and a world-renowned expert in climatology, is leading a weather action taskforce with the objective of better equipping NR to understand the risk of rainfall to its infrastructure, drawing on the latest scientific developments in monitoring, real-time observations and weather forecasting.

Lord Robert Mair, Head of the Cambridge Centre for Smart Infrastructure and Construction (CSIC), is spearheading an earthworks management taskforce to see how NR can improve the management of its earthworks portfolio, looking at past incidents, latest technologies and innovations and best practice from across the globe.