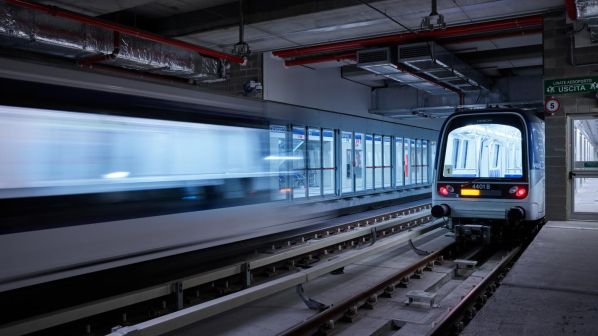 The line is the second driverless metro in Milan.
Photo Credit: Webuild

THE first 5.4km section of Milan Metro Line M4 (Blue Line) has opened, providing a metro connection to the international airport at Linate.

The new section has stations at Linate Airport, Repetti, Forlanini, Argonne, Susa and Dateo. There is interchange with the Trenitalia network at Forlanini and Dateo. The underground line is fully automated, using the same technology as Line M5 which opened in 2013.

The full Line M4 will be 15km long, running from Linate in the east via the city centre west to San Cristoforo railway station, serving a total of 21 stations. The line will have an end-to-end journey time of 30 minutes, with trains operating every 90 seconds during peak periods. The section from Dateo to San Babila in the city centre is due to open in spring 2023, proving a 12-minute journey time to the airport, followed by the rest of the line in 2024.

The full line is expected to carry 86 million passengers a year, and will significantly reduce road traffic with capacity for 24,000 passengers per hour per direction when fully open. Line M4 will take the total length of the Milan Metro to 188km.

The project was commissioned by the City of Milan and built by the M4 concessionaire company, which is responsible for design, construction and operation of the line. M4 is two-thirds owned by the city of Milan, with Webuild and Hitachi holding majority shares in the private third of the consortium, alongside Amat, Astaldi, MM, Sirti and ATM.

Webuild was responsible for construction using tunnel boring machines (TBMs), and supported the safeguarding of the city’s artistic and historic heritage through the temporary removal of monuments such as the column of Verziere, the statue of the Saviour at Largo Augusto and a medieval wall on Via Francesco Sforza. The monuments will be returned to their original locations after being cleaned and restored.

“I am very happy to be in Milan today to deliver to the city’s residents this new metro line: the first part of the M4 and the park that we built along Viale Argonne,” Salini says. “This is the result of the expertise and commitment of all the women and men who have worked to create this infrastructure during a particularly difficult moment, what with the increase in raw materials prices, Covid and the war. It is a very important achievement for Webuild, which continues to deliver to clients and their residents new sustainable infrastructure of excellent quality.”