DECEMBER has become the month when a large number of Chinese transit projects come to fruition, and December 2019 was no exception with the completion of metro projects in 15 cities. 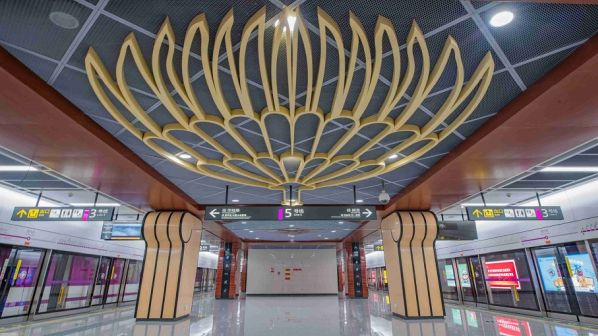 Chengdu has some spectacular stations including Gao Shengqiao on the new Line 5.

Chengdu opened its new 49km Line 5 from Huagui Road south to Huilong on December 27 together with a 25.8km extension to Line 10 running southwest from Shuangliu International Airport Terminal 2 to Xinping.

Chongqing opened a 9.5km southern section of its Loop Line from Haixialu to Erlang on December 30 and a one-station extension to Line 1 from Jiandingpo west to Bishan.

Guangzhou opened a 35.3km extension to its suburban metro Line 21 on December 20 from Zhenlongxi to a new terminal in the city centre at Yuancun adding to the 25.2km Zengcheng Square - Zhenlongxi section which opened in December 2018. This was followed on December 28 by the inauguration of a 1.8km extension to Line 8 from Fenghuang Xincun north to Cultural Park.

The first metro lines opened in Hohhot, where the city’s 21.7km line opened on December 29, and Macau which saw the start of operation on the 9.3km Taipa Oceano - Terminal Marítimo da Taipa light metro line.

Beijing became the world’s largest metro network at 699km on December 28 with the opening of Line 7 from Jiaohuachang to Huazhuang, and the Batong Line linking Tuqiao with Huazhuang.