Part of order for 23 Alstom EMUs, they will boost capacity on North West Line. 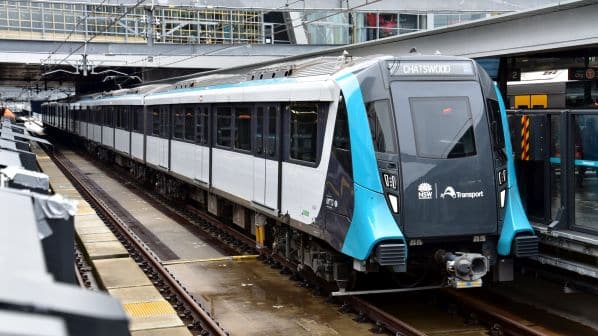 FOUR of 23 new driverless EMUs supplied by Alstom for Sydney’s City and Southwest metro line have entered service on the Metro North West Line, providing more flexibility on the existing network ahead of the Southwest metro opening in 2024.

Alstom has delivered 20 of the 23 new Metropolis fully automated trains so far, with each train required to complete rigorous testing before entering passenger service.

This includes onboard systems such as passenger information displays, the braking system, lighting and door operation. This is followed by the train moving onto the network for the first time to complete a programme of tests including acceleration and braking to ensure Sydney Metro’s safety standards are met.

The trains must also complete a minimum of 500km of fault-free operation prior to introduction into passenger service.

All 23 of the new driverless trains are expected to join the North West Metro Line’s existing fleet of 22 Alstom Metropolis trains - the first fully automated rolling stock to operate in Australia - by mid-2023, with the new vehicles doubling the size of the rolling stock fleet.

Once the City and Southwest Line becomes operational, planned for 2024, the new trains will begin testing on that route, which includes 15.5km twin tunnels under Sydney Harbour and seven new stations.

Construction of the 30km City and Southwest Line, running from Chatswood to new stations in the city centre and southwest to Bankstown, began in 2017.

In June it was reported that the City and Southwest Line project had exceeded by $A5.1bn ($US 3.5bn) its original $A 11.5bn-$12.5bn estimated cost. This overspend was attributed to market conditions and the impact of the Covid-19 pandemic.

However, the last section of track in the line’s twin tunnel section was laid on August 31 by New South Wales state premier, Mr Dominic Perrottet, and New South Wales minister for transport, veterans and Western Sydney, Mr David Elliott, who said the new line would have a target capacity of 40,000 passengers an hour.

“This new fleet will ensure commuters have access to metro services every four minutes from Rouse Hill to the heart of Sydney,” says Elliott.