The VLR vehicle will begin on-track tests in Dudley later this year. 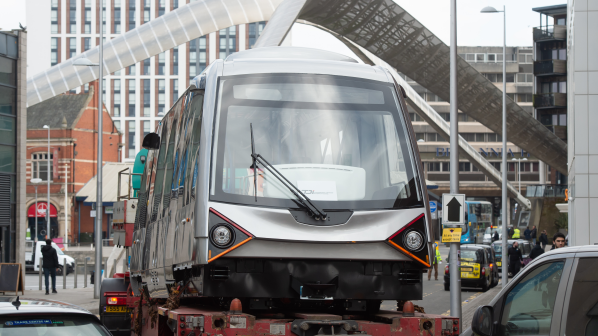 THE Coventry Very Light Rail (VLR) project, a partnership between Coventry City Council, WMG University of Warwick and Transport Design International (TDI), has announced that its VLR prototype is being prepared for track testing.

The vehicle has been taken from its assembly site at NP Aerospace’s Coventry facility to undergo static software testing. The vehicle will then begin on-track tests later this year on a dedicated track at the Black Country Innovative Manufacturing Organisation’s (BCIMO) VLR National Innovation Centre in Dudley, West Midlands. NP Aerospace was appointed as the project’s assembly contractor in August 2020.

Once at the test track, which was built as part of the wider research programme, the vehicle will be tested to ensure that it performs according to expectations. Trials will include testing the rapid battery charging system, which should allow the vehicle to be recharged in minutes.

The tests will be the culmination of two years of work by the partners, since the release of the first 3D vehicle simulations by WMG in March 2019.

“The vehicle has been constructed within Coventry with a reliance on a regional supply chain where possible, showing the strength in depth of local manufacturing,” says Dr Darren Hughes, from WMG. “It is a unique vehicle with state-of-the-art technologies including an advanced battery power-train and resilient glazing making it even safer for public use.”

The project is part of a plan to develop an affordable, electric-powered light rail system for Coventry, to equip the light rail line planned to run between the mainline station and Walsgrave Hospital. An accompanying track system is being developed by Coventry City Council and WMG in cooperation with Ingerop Conseil & Ingénierie, France.

The project has been primarily supported through funding from the British government’s Local Growth Fund, through the Warwick Local Enterprise Partnership (CWLEP) and the West Midlands Combined Authority Devolution Deal.

“Very Light Rail has reached this really important point thanks to the researchers, innovators, engineers and manufacturing skills we have right here in the city,” says Mr Jim O’Boyle, Coventry City Council’s cabinet member for jobs and regeneration and director of Coventry and Warwickshire Local Enterprise Partnership. “On-track testing will take some time, but it should prove the concept, and at that stage I expect there to be lots of interest in VLR from other areas of the UK and abroad.”