The order from CRRC Dalian brings KiwiRail’s DL class fleet to a total of 73 units. 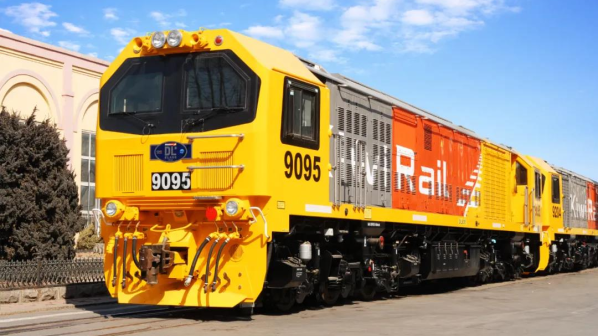 New Zealand: CRRC Dalian, China, has received an additional order for 10 DL class diesel locomotives from operator KiwiRail. The order is KiwiRail’s fifth from CRRC Dalian, bringing KiwiRail’s DL class fleet to a total of 73 units, accounting for approximately a third of the operator’s total fleet. The order follows an initial batch of 20 units delivered in 2010-11, 20 units in 2013, eight units in 2014, and a fourth batch of 15 in May 2017.

Spain: Basque regional transport authority Euskotren has ordered four four-car EMUs worth €31.95m from CAF, to be delivered within two years. The trains will have a capacity of at least 385 passengers, 30% of whom must be seated, and will be similar Euskotren’s existing fleet of series 950 three-car commuter EMUs. The contract will also cover the supply of additional parts and maintenance services.

The UATL is intended to increase track adhesion without the need to employ sand, and the UGSL is intended to reduce wear on wheel ridges and decrease locomotive resistance on curved sections. The locomotive is intended to be employed for shunting in the mountainous Toreya - Turma section of the Eastern Siberian Railway.

Italy: Intermodal freight operator GTS Rail has received three additional Traxx DC E.494 locomotives from Bombardier, increasing its Traxx fleet to 20 locomotives. The new locomotives will enter service in September, and are part of GTS Rail’s plan to double its fleet in the next five years. The locomotives will be serviced by Bombardier under a full maintenance contract.

France: French National Railways (SNCF) is set to introduce 10 Euroduplex TGVs built by Alstom on the Paris - Lyon route from early 2022. The trains will be designated as L’Océane and are the same configuration as the L’Océane sets deployed on the Paris - Bordeaux route since the opening of the Tours - Bordeaux high-speed line in 2017.

The new trains will replace TGV Dasye sets on Paris - Lyon services and will be supplemented by 28 TGV Duplex trains, which date from 2004-2006, and are currently undergoing a mid-life overhaul, including interior refurbishment. These L’Océane Like trains will have 556 seats like the L’Océane sets.

Mongolia: TMH subsidiary Bryansk Machine-Building Plant (BMZ) has delivered two TEM18DM diesel shunting locomotives to Mongolia for use on the Ulaanbaatar Railway. The delivery is part of an order agreed in 2019 for 10 TEM18DMs and 14 2TE25KM locomotives to operate mainline freight services, for delivery by mid-2021. BMZ previously delivered one TEM18DM and seven 2TE25KM locomotives under the order in early 2020, and two more 1520mm-gauge TEM18DM locomotives in November last year.

Singapore: Hyundai Rotem has selected Wabtec to supply braking systems, doors and air-conditioning for a fleet of 62 three-car automated trains currently being manufactured for Singapore’s Land Transport Authority (LTA) for use on the new 24km, 24 station Jurong Region Line, which is due to open in 2026. Wabtec will provide 186 Metroflexx braking systems, 372 roof-mounted air-conditioning systems and more than 1100 external ES2-type doors for the project. All systems will feature condition-based maintenance capabilities.

Meanwhile, LTA says it is set to procure 17 two-car trains to boost capacity on the Sengkang-Punggol automated people mover (SPLRT). The order will double the number of two-car trains in the SPLRT fleet, which currently comprises 16 two-car and 25 single-car trains. In addition, to increase stabling capacity and create more space for maintenance, the existing 3.5 hectare SPLRT depot, which is situated above the North East Line’s depot in Sengkang, will be expanded to 11.1 hectares. The new trains are expected to enter service between 2024 and 2027. The depot expansion project will commence by the start of the year and conclude in 2027.

Germany: Talgo has awarded a contract to Knorr-Bremse to supply braking systems, exterior door systems, windscreen wiper units and heating, ventilation and air-conditioning systems for a fleet of 23 ECx long-distance passenger trains being supplied to German Rail (DB) for deployment on the Berlin - Amsterdam route in 2023. The contract includes an option for Knorr-Bremse to supply systems for an additional 77 trains.

Russia: TMH subsidiary Metrowagonmash (MVM) will supply St Petersburg Metro with a pair of battery-powered asynchronous-drive locomotives. The first locomotive will be delivered by March, and the second by May 2022, with the vehicles to be based in the Severnoye and Yuzhnoye depots. The locomotives are part of the metro’s renewal programme for special rolling stock, which will be carried out between 2020-25. The locomotives will have a design speed of 90km/h and a service life of 50 years.

Czech Republic: Freight operator ČD Cargo has signed a lease with Alpha Trains for the provision of five new Siemens Vectron MS locomotives, following a tender in late 2020. The locomotives will be used to haul freight services in the Czech Republic, Slovakia, Germany, Austria and Hungary.

France: Alstom,  the Metropolis of Aix-Marseille-Provence, and designer Mr Ora Ïto have finalised the exterior and interior designs of a fleet of 38 new four-car rubber-tyred metro trains for the Marseille Metro, which are due to enter service in 2023. The trains are part of a €430m project to renew and automate the metro under a contract awarded to Alstom in November 2019. The new trains include open areas near the doors, large windows and modern passenger information and air-conditioning systems, as well as a new blue and white livery.