One of the highlight exhibits at the outside track area at this month’s InnoTrans exhibition will be Siemens’ Mireo Plus H. Kevin Smith previews the hydrogen multiple-unit. 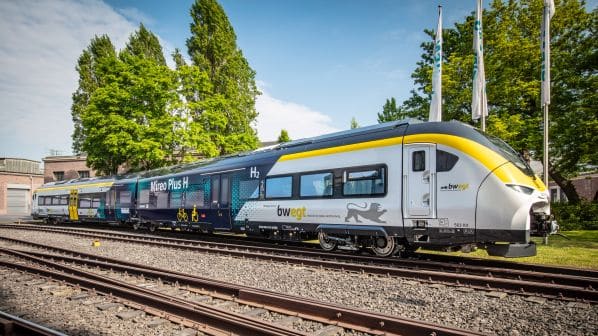 SIEMENS Mobility and German Rail (DB) officially launched the Mireo Plus H hydrogen multiple-unit alongside a new mobile hydrogen storage and refuelling trailer during an event at the manufacturer’s Krefeld plant on May 5.

Mireo Plus H is Siemens’ first venture into hydrogen traction. It arrives around six years after rival Alstom launched its Coradia iLint multiple-unit, which it has since sold to customers in Germany, Italy and France, and trialled in countries across Europe.

Speaking on a conference call with journalists following the launch, Mr Jochen Steinbauer, director for development of alternative drives at Siemens Mobility, said around 15,000 diesel trains remain in service in Europe. While electrification is preferred, he says this is not possible overnight and in many cases the cost of these projects does not add up.

“For this reason, we need other options to gradually replace diesel-powered vehicles,” Steinbauer said. “These alternatives include hydrogen-powered multiple-unit trains, which can enable completely emissions-free transport when fuelled with green hydrogen.”

The unveiling was a major milestone in DB and Siemens’ joint H2goesRail project, which was launched in November 2020. The project was funded by the German federal government’s National Innovation Programme for Hydrogen and Fuel Cell Technology (NIP 2). NIP 2 is co-ordinated by the National Organisation for Hydrogen and Fuel Cell Technology (NOW), with €13.74m of funding provided by the Federal Ministry for Digitalisation and Transport (BMDV).

The principles of using hydrogen to power the Mireo Plus H’s traction system are the same as the Coradia iLint and other hydrogen trains introduced in recent years such as Hydroflex, developed by Porterbrook in Britain, and Linsinger’s MG11 Hydrogen track milling machine.

The process is based on electrolysis within the fuel cells where hydrogen stored onboard the train at 350 bar in tanks delivered to the train’s two 200kW fuel cells at 50 bar combines with oxygen taken from the air to produce electricity. This charges the lithium titanate oxide (LTO) battery packs, which power the train’s traction and auxiliary power systems. Water is produced as a by-product of electrolysis and is released onto the track.

Steinbauer says a key focus for Siemens in the development work for the Mireo Plus H was adapting and optimising the traction technology and subsystems so they are compatible with the manufacturer’s Mireo regional train platform. Launched in 2016, the train features lightweight aluminium bodyshells and lighter bogies. It is also articulated, reducing the number of bogies on a two-car set to three, and four on the three-car variant, offering an overall 20% weight saving compared with the Desiro ML.

The Mireo Plus H retains the platform’s “empty tube,” concept enabling customers to customise interior layouts. This was achieved by positioning the tanks supplied by Nproxx, Germany, and which store up to 180kg of liquefied hydrogen, on the roof of the train while the battery packs supplied by Saft are located beneath the floor of each of the two cars. The train’s silicon carbide (SiC) traction inverter, which was built by Siemens, is also located beneath the train.

Much of the research and development work for the hydrogen traction system took place in partnership with Canadian fuel cell supplier Ballard Power Systems. Siemens signed a Memorandum of Understanding with Ballard to customise its 200kW fuel cell for the Mireo platform in 2017. A subsequent research project with the Rhine-Westphalia Technical University (RWTH) in Aachen under a programme coordinated by NOW, which commenced in 2018, sought to further adapt and optimise the technology. BMVI provided around €12m of funding for the scheme under NIP 2.

“We wanted to be sure that the interconnection of the subsystems works very well and is optimised,” Steinbauer says. “That’s the hard part: the interaction of the subsystems; the fuel cell together with the battery together with the hydrogen storage, the traction converters and the motors. That’s the reason why we did this exercise with all the different partners at the University of Aachen before we implemented it on the train.”

“The Mireo Plus H can be used for an entire day without refuelling.”

As well as working with Ballard, Siemens signed an agreement with Siemens Energy, a Siemens spin-off, for the joint development of an electrolysis and fuelling solution for the Mireo Plus H in October 2020. The result is what Steinbauer describes as the “next-generation fuel cell system.”

Among the key functions is an increased energy efficiency rate, meaning the train is consuming less energy overall, and reducing waste heat from the fuel cell. Work also focused on increasing power density and extending the lifecycle of the fuel cell, while limiting the overall two-car train length to 47m. In addition, Siemens says the weight of the hydrogen train is comparable with an EMU, stating that the hydrogen equipment on the Plus H is roughly equivalent to a pantograph and traction transformer on the EMU.

The two-car Mireo Plus H has an operating range of up to 800km, which extends to 1000km in the three-car variant. The manufacturer says that with a 1.7MW power rating and a top speed of 160km/h, the hydrogen train possesses similar performance to an equivalent EMU, while acceleration of up to 1.1m/s² is comparable with a metro train.

“The 800km range is the requirement of the market and corresponds with the daily range of regional trains,” Steinbauer says. “That means the Mireo Plus H can be used for an entire day without refuelling.”

While the high range emphasises the train’s operational flexibility, hydrogen production and refuelling infrastructure is still in its infancy, putting hydrogen fleets at a disadvantage compared with their diesel counterparts. DB has attempted to address this challenge by developing a new mobile hydrogen refuelling concept and related maintenance strategy as part of the H2goesRail project.

Mr Marc-André Shaba, project manager for the H2goesRail project at DB, told the press call that introducing hydrogen infrastructure to support the operation of hydrogen trains is a key element of the railway’s strategy to move away from diesel.

“We have to harmonise the hydrogen train with the hydrogen infrastructure and the maintenance strategy,” Shaba says. “Those three elements must be joined together in an ecosystem that is well established and optimised for operational purposes.”

Flexibility is at the heart of the refuelling solution presented by DB. A shipping container positioned on a flat road trailer stores up to 900kg of green hydrogen. The trailer can be moved by road to wherever refuelling needs to take place, reflecting what Shaba says is the fact that many sites are not yet ready to produce their own green hydrogen. The system’s flexibility also extends the scope for testing and ultimately operating the Mireo Plus H across Germany while these sites are developed.

The green hydrogen currently used by DB and Siemens is produced in an electrolyser installed at the DB maintenance depot in Tübingen using electricity sourced from renewables. The electrolyser splits water into hydrogen and oxygen, and after being compressed, the hydrogen is stored in the mobile unit at 500bar, where it is processed and cooled prior to refuelling.

Shaba says that as part of its work DB has developed an intelligent refuelling system, which is able to recognise the temperature and pressure of the hydrogen storage system onboard the train, helping to optimise the speed at which fresh green hydrogen is delivered.

The partners state that the hydrogen refuelling concept offers performance equivalent to a diesel system, which they point out is imperative if hydrogen trains are to provide a competitive alternative given the closely timed scheduling of regional passenger services in Germany.

Critically, the refuelling system is not tailored solely for the Mireo Plus H. Shaba says DB has developed the whole package for the refuelling mechanism, including the design of the refuelling unit and corresponding refuelling point on the train, for use by all train types. “The interfaces between the coupler and the trains need to be harmonised and that is something we are working on,” Shaba says. “We need standardisation.”

Initial testing of the Mireo Plus H in the H2goesRail project is taking place at Siemens’ test track at Wildenrath ahead of switching to Baden-Württemberg in 2023. A pilot passenger service will commence on the line between Tübingen, Horb and Pforzheim in 2024. The Mireo Plus H will replace a diesel train used on this route with approximately 120,000km of scheduled rail services planned.

The partners say the typical service frequency and topography of the route make it particularly suited to the tests, and drivers will be trained specifically to operate the hydrogen train in passenger service. Overall, replacing the diesel train is expected to save 330 tonnes of CO₂ every year.

While the H2goesRail project will take the lead on introducing the Mireo Plus H into passenger operation, other German states are lining up to try hydrogen. Siemens signed a leasing agreement with Bavarian Regional Rail (BRB) in March to supply a Mireo Plus H for trial hydrogen operation. Pilots will take place on the Augsburg - Füssen route from mid-2023 and will be extended to other routes throughout the BRB network over the course of the 30-month pilot. Passenger services will officially commence in January 2024.

In addition, on June 27 Siemens and Berlin and Brandenburg operator and infrastructure manager Niederbarnimer Railway (NEB) confirmed an order for seven two-car Mireo Plus H trains for use on the Heidekraut Railway (RB27), comprising the Berlin-Wilhelmsruh - Basdorf line, which is due to reopen to passenger service in 2024.

These trials follow hot on the heels of the first commercial operation of a hydrogen train on the 100km regional line from Cuxhaven to Buxtehude via Bremervörde, west of Hamburg, on July 25. Elbe-Weser Transport Company (EVB) is operating a fleet of 14 iLints purchased by Lower Saxony Transport Authority (LNVG) in 2017 while Alstom is also supplying 27 iLints to Rhine Main Transport Authority for operation by DB Start. Trials are underway and delivery of the entire fleet is expected by March 2023.

With Europe’s two leading rolling stock manufacturers now possessing a viable and increasingly proven hydrogen platform, and CAF set to follow as part of the FCH2Rail project, which is focusing on retrofit rather than new build, the prospect for hydrogen traction is building across Europe. Undoubtedly hydrogen’s role in a net zero railway will be central message of each of the manufacturer’s exhibits at this month’s big show.