Taiwan's first two metro networks have experienced vastly different fortunes since they opened. Yet despite the challenges, the island's major cities still have confidence in urban rail, as Glenn Smith discovers. 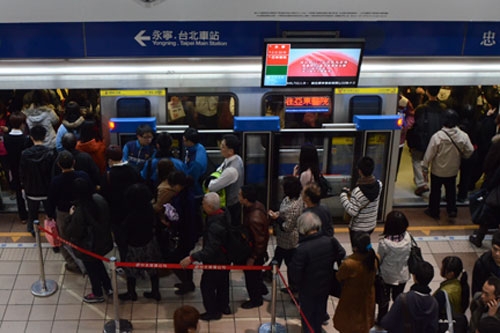 Metro Taipei currently carries around 1.6 million passengers per day, and ridership is expected to increase significantly.

IT will lose money," the taxi driver says, referring to the metro planned for his city, Taichung. "Look at that bus stop. Empty. There's another - empty - right in front of a hospital. The bus companies are supported by taxes from the government. In Taichung, people drive cars or ride motorcycles."

Taichung's first metro line is years from completion, but the city is already spending $NT 600m ($US 20.3m) a year to wean citizens out of their private vehicles and onto buses. "That includes subsidies for three programmes," Hsu explains. "Firstly, bus riders get the first 8km of their journey free-of-charge, courtesy of the government. Secondly, there are free transfers. Thirdly, new bus routes are also free for the first six months of operation."

In a farsighted move, Taichung is reconfiguring its bus routes so they trace the footprint of its future metro.

Taichung is the third city in Taiwan to build a metro, and it intends to learn from the successes and failures of Taipei and Kaohsiung.

Taipei, the island's political and commercial capital, launched its first metro line in 1996, and has run profitably since 1998. The network has since expanded to more than 100km and is still growing. Kaohsiung, a major industrial centre 250km south of the capital, opened its first two metro lines in 2008. Four years on, continuing operating losses are delaying the expansion of the network.

Metro Taipei ridership hit the 5 billion mark in February, and so far this year daily ridership has averaged 1.6 million. Last February, Metro Kaohsiung ridership averaged just 160,000 per day, only slightly better than at launch in 2008, and far below the 560,000 level forecast for 2010 when the consortium was established in 1999.

Metro Taipei is a public project planned by Dorts, constructed with loans from central and local governments, and operated by Taipei Rapid Transit Corporation (TRTC). Metro Kaohsiung, in contrast, is a 30-year build-operate-transfer (BOT) project.

Other cities want to follow in Taipei's footsteps. But enthusiasm is lacking at the Ministry of Transportation and Communications (MOTC), a gatekeeper for public transport funding. In a 2010 survey, MOTC found surprisingly low rates of public transport use. Even in Taipei, with its extensive metro and interlocking bus network, usage was a mere 34%, which compares unfavourably with Hong Kong (98%), Tokyo (87%) and Singapore (84%). For the rest of the island, usage is much lower - 6.7% in Kaohsiung, 6% in Taichung and 5% in Tainan.

"Instead of fighting for funds to build rail systems, it would be better to increase the use of public transport first," MOTC minister Mr Mao Chi-kuo told The China Times.

To win the support of Taiwan's central government, Taichung city government had to prove its projected level of ridership would ensure operational self-sufficiency once the trains begin rolling, according to Dorts' Fu. "Taichung signed a document saying it would financially support the metro if ridership falls short," says Hsu.

Interestingly, Taichung's metro is being built by Taipei Dorts. In November 2008, 18 years after the city had begun planning the metro, MOTC finally gave Taichung its blessing, by granting the city access to government loans. However, MOTC stipulated that Taipei city government take charge of design and construction and that Taipei Dorts execute the plan.

The Taichung office is skeletal. Hsu, formerly with Dorts in Taipei, was reassigned to the Taichung City Government, RTSO, where a handful of Dorts employees are managing the project. Dorts staff in Taipei will handle design and bidding.

Located halfway between Taipei and Kaohsiung, Taichung is the island's 'middle' city. Situated in a broad valley, the city is sprawling eastward from the railway built a century ago, spilling past the north-south alignment of the Taiwan High Speed Rail line towards the Taiwan Strait.

The Green Line has an approved budget of $NT 51.4bn, and will loop through the heart of Taichung's modern city centre on viaducts above existing roads.

Work is just beginning. Utility relocation is contracted to Kaoming, while local engineering consultants Sinotech and CECI have been commissioned to carry out detailed design. The $NT 11bn electrical and mechanical contract has been awarded to KAC, a joint venture of Kawasaki Heavy Industries, Alstom and CTCI Machinery. The project will be finished by 2015.

Originally part of the Taichung metro plan, the Red Line will be built instead by the Taiwan Railways Administration, which will elevate a 21.2km stretch of existing railway and construct new stations. The Red Line is scheduled for completion in 2017.

Together, the Green and Red lines will encircle Taichung with a total of 16 stations. An additional section with four stations will connect the system with the Taiwan High Speed Rail station. In the longer-term, the 15km Blue Line will run east-west across the city, interchanging with both the Green and Red lines. When all three lines are completed in 2041, Taichung metro will carry 450,000 passengers per day.

To its credit, Kaohsiung completed its two existing metro lines, Orange and Red, in time for the 2009 World Games, which were hosted by the city. Metro Kaohsiung also has brightened the city with some notable architecture - Formosa Boulevard Station with its "Dome of Light" and the Central Park Station courtyard and its gardens. All are sources of civic pride.

But coaxing Kaohsiung citizens onto the trains is the problem. "Ridership is a sensitive issue for us," says Dr R C Lin, senior engineer, Kaohsiung Mass Rapid Transit Bureau (KMRTB).

What explains the disparity in public transit usage between Kaohsiung and Taipei? Collective wisdom, from transit insiders to taxi drivers, is that people in Kaohsiung like to drive and parking is not a problem. Almost year-round warm and dry weather is ideal for motorcycling. And, perhaps most importantly, petrol is cheap in Taiwan.

Nevertheless Kaohsiung Rapid Transit Corporation (KRTC), the consortium which won the BOT contract in 2001, is in a tough spot. The terms of the deal gave KRTC six years to build and 30 years to operate the system. But with the 14.7km Orange Line and 28.3km Red Line costing $NT 181.3bn to build, recouping this investment will be difficult unless ridership increases significantly.

Not surprisingly, Kaohsiung has opted to abandon the BOT model for its long-delayed light rail Circular Line. "Originally this was a BOT project, but we've revised the strategy," says Lin. "Last November, the mayor announced that we will build it ourselves, through a traditional tender process."

Unlike the Orange and Red lines, the 21.2km Circular Line will be built at grade with 35 stations. Much of the route follows the alignment of former freight lines that once served Kaohsiung harbour.

Lin expects groundbreaking to take place in October, and commercial services should start by 2019. "This will be Taiwan's first light rail line, and Asia's first catenary-free system," he says. CECI is carrying out basic design, but bidding for the systems contracts has yet to start.

Metro Taipei has few critics. Instead Taipei citizens see their MRT system as transformative. So does Dorts deputy commissioner Fu. "The MRT is not just transportation or convenience," Fu explains. "Taipei has become a new city, with higher standards of living. Walk near its stations and everywhere there is new commercial and residential construction."

Now in its 15th year of operation, Metro Taipei has 114.6km of track serving 101 stations, and carries 1.66 million passengers per day. Total construction cost to date is $NT 621bn, and $NT 292bn is budgeted for the 52.1km of new line currently under construction. Further expansion will extend the network to 270km by 2032, when daily ridership is expected to reach 3.6 million.

Ten lines are currently in operation, forming a grid of north-south and east-west routes across the city centre and extending outward into the rapidly-growing suburbs. In the city centre, stations are located at 800-1000m intervals, while in the suburbs they are 1-2km apart.

Major routes under construction include the central section between Zhongxiao Xinsheng and Guting, the 6.4km Xinyi line, the 8.5km Songshan line, the first phases of the WZS (8.8km) and Circular (15.4km) lines.

Metro Taipei's success has one downside. Central government is cutting back slightly on construction loans. "The government wants local government to share more of the capital investment," says Fu. "That is because the benefits are local. MRT spurs local development, and boosts the local tax base."

The tightening of government purse strings is a challenge for Dorts. The proportion of construction financing shared by central and local governments was previously a 70:30 split. Now the ratio must be negotiated for each line. On the Circular Line the split is 85:15, while for the Xinzhuang and Luzhou lines, the ratio was 75:25.

Fu says this policy shift could result in a funding gap for some projects, and may mean construction of new lines is divided into smaller phases. This means integrating electrical and mechanical systems will be more challenging. In an effort to reduce costs, Dorts has begun manufacturing its own trackwork. Successful in-house projects include the fabrication of direct fixation fasteners for floating slab track.

The metro faces a number of other financial challenges. Dr Huel Sheng Tsay, chairman of TRTC told delegates at Terrapinn's recent Metrorail conference in London that the fares structure has remained unchanged since the first line opened in 1996, while the 50% smart card discount for passengers transferring between buses and the metro costs the company $US 35m per year. TRTC receives no government subsidy, and last year paid $US 103.9m in rental fees to the city government, up from $US 79.2m in 2004. Between 2001 and 2011, this fee was calculated as 4% of TRTC's operating income. This year the formula will change to 3% of revenues plus 50% of net profit, and will be 2% of revenues plus 50% of net profit in 2013-15.

Despite these challenges, the years ahead present a host of opportunities for metros in Taiwan. As oil prices continue to rise and congestion becomes increasingly acute in rapidly-expanding cities, rail is likely to become a more attractive option for Taiwan's urban population.