Budapest’s rail network is facing a congestion issue as greater numbers of commuters living in the city’s sprawling suburbs look to travel into the city centre each day. As Ferenc Joó explains, an ambitious plan to upgrade the network including redeveloping stations, building new tunnels and bridges crossing the Danube is aiming to untangle the city’s transport network. 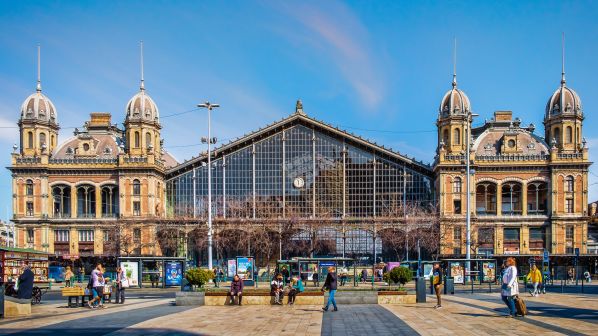 Nyugati station will be transformed into a through station following construction of a tunnel to Kelenföld station on the west side of the river Danube via Déli station, which will be relocated underground. Photo: Shutterstock/Eric Laudonien

THE Budapest Suburban Railway Node Strategy (BAVS) outlines plans for suburban rail-based transport for the Hungarian capital and its surrounding suburbs, defining comprehensive long-term goals and outlining the work required. The strategy, adopted by the government on December 28 2021, sets the ambitious goal of increasing the total number of passengers on suburban lines by 80% through a series of comprehensive and interdependent investments to be completed by 2040.

This network aims to:

Development of the strategy began in 2019 after it was commissioned by a consortium formed by the prime minister’s office, the Ministry of Innovation and Technology, MÁV and the Budapest Development Agency. The strategy was co-financed by the European Union’s Connecting Europe Facility (CEF).

The plan is expected to cost €10bn, a third of which will be implemented by 2029. This will be partially funded from the country’s allocation from the EU’s Resiliency and Recovery Plan, the CEF, and the EU’s Multiannual Financial Framework for 2021-2027.

Despite this shift in demographics, the majority of the population continues to work and study within Budapest, commuting daily into the city.

While the suburban rail network reaches most of the important surrounding population centres, there are still areas not served by a station. Deterioration of the lines, some of which are still single-track, also reduces travel speeds and service frequency, while the (Kobánya-Kispest) - Lajosmizse - Kecskemét line radiating from Budapest is yet to be electrified. Some stations are in a bad state of repair and without wheelchair access, reducing the attractiveness of rail. And while the fleet has been partially renewed, some 50-year-old trains remain in service.

The biggest problem is within Budapest itself. The rail network has not been significantly upgraded since the First World War, with nearly all suburban lines running to terminal stations. The number of interchanges with other public transport networks is also limited, with main lines often passing over metro and light rail lines without a stop.

While the suburban rail network reaches most of the important surrounding population centres, there are still areas not served by a station.

Left without high-quality public transport options, two thirds of the suburban population commutes by car, with only 30% of people using public transport, compared with 60% within Budapest.

On average, commuters spend 37 minutes in traffic jams every day, which corresponds to Forints 969.3m ($US 2.22m) of social damage every year. This multitude of cars also contributes significantly to climate change, with Hungary’s National Climate Change Strategy finding that greenhouse gas emissions must be reduced by between 52% and 85% by 2050 compared with 1990. The strategy calls for the shift of metropolitan traffic to rail. By 2030, 30% of road freight travelling more than 300km must be diverted to rail, with this increasing to 50% by 2050. Rail’s share of commuter traffic must also increase.

In short, the transport problems facing the Budapest metropolitan region can only be solved through the development of the suburban railway network and possibly by directing freight traffic away from the capital city.

Surveys suggest that almost twice as many people would use suburban rail if the service improved in frequency and quality. Data collected from lines which have been upgraded found traffic roughly doubling, while modelling shows that upgrades to the network would trigger a significant increase in use in every settlement where the suburban railway is already available. Indeed, increases in daily patronage of between four and 10 times are projected on lines served by older and more infrequent trains, potentially increasing MAV-Start’s passengers in the metropolitan region by 80% to more than 500,000 per day. Based on traffic surveys, proposed railway development is expected to encourage around 115,000 commuters to switch from road to rail.

To accommodate such an increase, suburban and city centre line capacity needs to increase, but this faces several problems. Budapest’s inner railway has already reached capacity at peak times, with this internal congestion resulting in an hourly service on external sections of the network. The network has also faced a period of chronic under investment with only 3% of rail infrastructure spending allocated to sections within Budapest since Hungary’s accession to the EU in 2004.

With no practical way of substantially increasing capacity at city centre stations due to the large areas of land required, the only solution is to untie the rigid system of terminal stations.

BAVS is aiming to more than double the number of trains crossing the city border at peak hours. It includes both infrastructure upgrades to boost capacity and a transformation of inner-city services to enable suburban commuters to reach several destinations in the city through connections with at least three metro lines as well as tram and bus lines instead of a single terminal station. This solution will also effectively create a rapid transit network offering an equivalent service to a metro on completely new routes.

A key part of the plan is the €950m Southern Railway Ring project, which involves the construction of a 5km third track across the river Danube between Ferencváros and Kelenföld. A third single-track rail bridge is under construction alongside the two existing bridges, which have already been replaced. However, track laying has been delayed by the need to widen an embankment through a heavily populated area, while other bridges will need to be widened to accommodate the additional track. New stops will be built to allow an S-Bahn style service to operate, while a new overpass will be built at Ferencváros to segregate passenger and freight trains. The station at Ferencváros will also be moved to the east to improve the transfer to metro Line 3.

In the long term, the most important element of the BAVS is the construction of a 4.5km tunnel connecting Kelenföld station on the west side of the river Danube to Nyugati station in the east, starting half way between Kelenföld and Déli. This would partially transform the existing terminal station at Nyugati to a through station, making it the capital’s main station. The terminal station at Déli would also be moved underground to become a transit stop between Kelenföld and Nyugati stations. This would free up the area currently used by Déli station and part of Nyugati station for large-scale urban development projects.

With no practical way of substantially increasing capacity at city centre stations due to the large areas of land required, the only solution is to untie the rigid system of terminal stations.

The tunnel will carry two electrified lines dedicated to passenger services, with capacity for 20 trains per hour per direction. This would improve access and shorten journey times to the city centre, increasing the number of connections from the east and the west of the country to the capital without a transfer.

BFK is undertaking a feasibility study alongside the main contractor, Fomterv, SMA and Partners and UN Studio for the project. A contract to carry out the detailed environmental assessment and to gain environmental approval for the project was awarded to Fomterv on February 15 2022. An international design competition for the renewal of the Nyugati station and its surroundings was launched in 2021, with 12 major international architectural firms due to submit their plans by the spring. The new Nyugati station will contain between nine and 13 tracks at grade and eight underground where trains will terminate from the planned tunnel.

While Budapest’s HÉV [railways of local interest] suburban lines are known for their reliability, they are operating with ageing infrastructure and rolling stock that is nearly half a century old. In addition, the H6 Ráckeve and the H7 Csepel lines in the south of the city are not connected with the metro network. BAVS proposes upgrading these lines and extending them underground to Kálvin tér where they would connect with metro lines 3 and 4, as well as the light rail network. These lines could eventually be extended to connect with the H5 to Szentendre in the north.

Overall the plan is to create a metro-style rapid transit line under the city centre with access from the surrounding regions at both ends. This north-south suburban and urban rapid transit network would be partially integrated into the mainline network, and HÉV services could be extended to both the north and south via lines to Esztergom and Kunszentmiklós. In the long-term, as well as upgrades and new rolling stock, the eastern HÉV line to Gödöllő (H8) and the Csömör branch (H9) will be connected to metro Line 2.

A full vehicle replacement project has begun on lines H5, H6 and H7, although the initial call for tenders for 54 120m-long trains was withdrawn in April 2021, as the cost of the bids was deemed too high.

Most of the double-track electrified main lines leading to Budapest carry freight, international, domestic long-distance, and suburban traffic. Achieving the service frequency outlined in the BAVS will require increased capacity and the segregation of services by speed. Freight trains travelling across Hungary could be moved off Budapest’s network following the construction of the V0 freight line between Szolnok and Gyor, which will run south via Dunaújváros and Székesfehérvár, away from Budapest city centre. ITM, the ministry responsible for transport, was expected to decide on the precise alignment in late February.

The plan outlined in BAVS is to have suburban trains in Budapest running every 15 minutes or more frequently on the internal sections and every half an hour on the external sections during peak hours. If the plans are fully implemented, passengers will be able to travel from each line to several destinations within the city.

The Budapest-Nyugati - Esztergom Line has been reconstructed in recent years, including electrification and partial track doubling. While this has not improved journey times to the desired level in part due to geographical challenges and the poor state of sections within Budapest, passenger numbers have still more than doubled. This has caused further capacity restraints which can only be improved with the introduction of double-deck trains.

The reconstruction of two other branch lines, from Nyugati to Vác via Veresegyház and to Kecskemét via Lajosmizse, is underway including partial track doubling, which will allow 15-minute headways on inner city sections and 30-minutes elsewhere. Some new stops and accessible platforms will need to be installed, while the line from Nyugati to Lajosmizse also needs to be electrified. A new section of double-track line is also planned on the Kobánya-Kispest - Monor line, which will create a rail connection with Liszt Ferenc International Airport. Additional tracks are planned along the initial section of the line to Vienna, which may also eventually serve the proposed high-speed connection to Bratislava, Vienna, Prague and Warsaw. Renovation of the line to Miskolc and Košice in the northeast is already underway, which will add extra tracks on the urban section. To the north, another two tracks are planned as far as Dunakeszi gyártelep.

One area of Budapest’s suburban network that is still in good shape is its fleet following significant investment in recent years with the support of EU funds. The fleet currently consists of 123 Flirt EMUs, each seating 200 passengers, and 40 double-deck Kiss EMUs (30 of which have been delivered so far), with 600 seats. This means all services are provided with modern, low-floor, air-conditioned vehicles with good acceleration. However, further development to the network resulting in more frequent services will require the purchase of some 100-120 additional EMUs, making Budapest a hot spot for rail investment in Eastern Europe in the coming years.