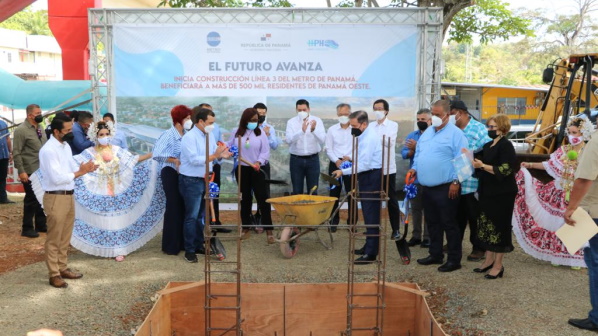 Work on the 24.5km project is expected to take approximately four years to complete. Its launch follows the approval of contracts and financing for the project earlier this month by Panama’s comptroller general, Mr Gerardo Solís.

Construction will be carried out by the HPH Consortium, comprising Hyundai Engineering and Construction and Posco E&C, under a $US 2.06bn design, construction and financing contract awarded in February 2020.

Phase 1 will run from Albrook to Ciudad del Futuro, carrying approximately 160,000 passengers. The line will reduce average travel times during peak hours from 1h 30min to 45 minutes and will have 14 stations. A potential 34km Phase 2 extension to La Chorrera is also planned.

The line is primarily elevated, but also includes approximately 5.3km of tunnels with a maximum depth of around 64m.

When the line opens in 2025, it will be operated using a fleet of 28 six-car trains equipped with regenerative braking, supplied by a consortium of Hitachi, Hitachi Rail STS and Mitsubishi under a $US 883m contract awarded in October 2020. The contract also covers the provision of electrification, signalling and communications and control systems for the line.

“Improving mobility in Panama City is one of the main commitments that the Panama Metro has,” Ortega says. "Even in the midst of the current health crisis and its economic consequences, we continue to contribute to the economic growth of the country with the launch of Line 3.”