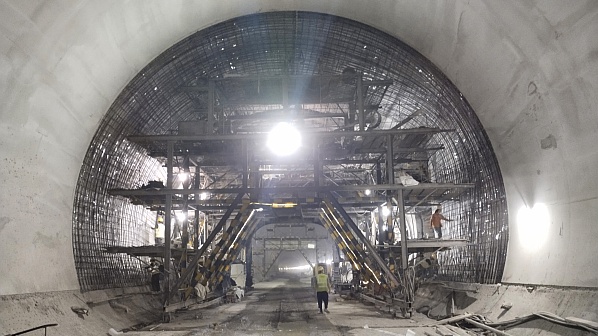 Construction of tunnel number 11 (pictured) was completed in July, with two more tunnels finished since.
Photo Credit: CREC (via Twitter).

CONSTRUCTION of the $US 6.07bn Jakarta - Bandung high-speed line in Indonesia has passed important milestones in recent days with the completion of two tunnels.

China Railway Engineering Corporation (CREC) is building the line for Kereta Cepat Indonesia-China (KCIC), a joint venture between Chinese and Indonesian state-owned firms that will run the 142.3km new line.

CREC says construction both of tunnels faced difficulties. Complicated geological conditions affected work on Number 8 tunnel as it passes under existing roads and railways. Similar problems were experienced with Number 10 tunnel along with the shallow burial depth.

Other recently completed work on the line includes the pouring of concrete for the Tegal Luar station footbridge on August 5. This followed the completion of the roofing at the new station. The next stage of that project includes construction of the steel structure.

On July 20, CREC completed construction of Number 11 tunnel on the route. This is a 1110m long single-hole tunnel built for double-track with a 200km/h design speed.

When open, the new 350km/h line will reduce journey times between Jakarta and Bandung from more than three hours on the existing 173km 1067mm-gauge line, to around 40 minutes. It was due to open in 2019, but that was postponed until 2021 at the earliest. There will be four intermediate stations on the railway.

For detailed information on high-speed rail projects around the world, subscribe to IRJ Pro.