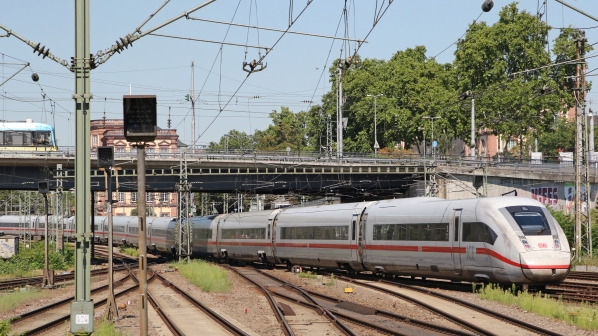 After considering 32 various routes, the 57.8km option 2b has been selected.

The new 300km/h line will begin south of Frankfurt airport at Zeppelinheim, where it will connect with both the airport and Frankfurt city centre via existing routes. It will then follow the A5 highway south to the Darmstadt area, before following the A67 highway to Lorsch, around 15km north of Mannheim.

The new line will then run under the A67 before heading southwest, largely in tunnels, to a junction with the existing Zeppelinheim - Gross Gerau - Mannheim line south of Lampertheim. Services will then use the existing line via Mannheim-Waldhof station to reach Mannheim main station.

The new line will include 12.7km in tunnels and 7.2km in cuttings. The line will reduce the fastest ICE journey times between Frankfurt and Mannheim from 38 minutes to 29 minutes and is part of long-term plans for the regular-interval national timetable.

Two additional access lines will be built: a short curve near Weiterstadt to connect the new line with the Mainz - Aschaffenburg line, primarily for freight traffic, and a connection south from Darmstadt to the new line, partly in tunnel, to allow ICE services to continue to serve Darmstadt.

The line will be built for mixed passenger and freight use with freight using the line at night.

Planning permission and funding agreement for the project will be sought in the next 18 months, with construction unlikely to begin until the mid-2020s at the earliest.

In mid-November, German Rail (DB) launched public consultation for a new Mannheim - Karlsruhe high-speed line connecting the new Frankfurt - Mannheim line with the Karlsruhe - Basle line, which has been upgraded over the past two decades.

The Mannheim - Karlsruhe line could be either a new alignment or a complete rebuild of existing infrastructure. The search area for potential routes comprises a wide area running from Mannheim-Waldhof, north of Mannheim city centre, across the Rhine plain to Karlsruhe in the south.

Mannheim - Karlsruhe ICE services currently use the first 32km of the 280km/h Mannheim - Stuttgart high-speed line, which opened in 1991, before switching to 200km/h conventional track for the remaining 28km.

The planning and consultation process is expected to take several years before a preferred route is agreed.