BRITAIN’s secretary of state for transport Mr Chris Grayling confirmed on April 9 that Abellio has been selected as the winning bidder for the East Midlands franchise. 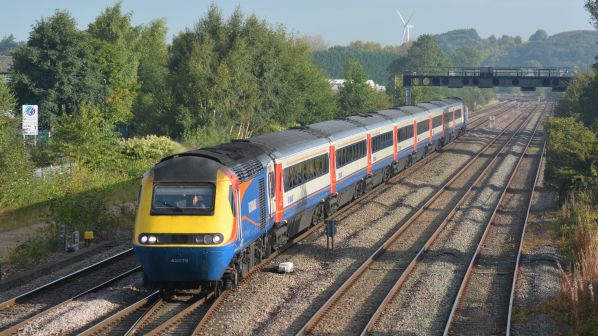 The existing diesel inter-city fleet will be replaced by a new fleet of bi-mode trains.
Photo Credit: Keith Barrow

The eight-year franchise begins on August 18 and includes an optional two-year extension. The franchise will operate as East Midlands Railway (EMR), a wholly-owned subsidiary of Abellio Transport Holdings.

The network encompasses intercity services on the Midland Main Line from London St Pancras to Corby, Nottingham, Derby and Sheffield and regional services in central England.

Abellio will invest around £600m in rolling stock and station improvements, including the introduction of a new fleet of bi-mode trains on the Midland Main Line, entirely replacing the existing inter-city fleet of HSTs and class 222 Meridian trains. The first of the new trains will enter service by April 2022, although the DfT says "modern diesel trains" will replace some of the HSTs from May 2020.

The entire regional train fleet, which comprises Sprinter DMUs built in the 1980s and 1990s, will also be replaced with "more modern and comfortable trains."

According to the Department for transport (DfT), the new franchise will provide more than 18,000 additional peak seats into London St Pancras, 5000 into Lincoln and 3200 into Nottingham by December 2021.

There will also be an improved delay-repay compensation scheme, and ‘flexipass’ tickets to provide better value fares.

In April 2018 a joint venture of First Group and Trenitalia withdrew from the competition to focus their resources on bidding for the West Coast Partnership. On April 10 incumbent operator Stagecoach announced it had been disqualified from the competition for submitting a “non-compliant bid.”

The Midland Main Line is currently undergoing a £1.5bn upgrade, which includes the extension of electrification from Bedford to Corby and Market Harborough.