Australian rail spend to average $A 14.4bn over next five years

Report says $A 129bn will be spent in next 10 years on new construction and maintenance compared with $A 96bn in previous decade. 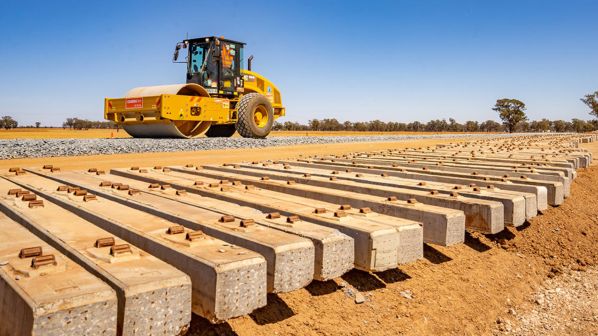 The Inland Rail project will account for a significant portion of this spending.
Photo Credit: ARTC

SPENDING on rail construction and maintenance in Australia will increase to $A 14.4bn ($US 9.75bn) a year over the next five years, a BIS Oxford Economics report released by the Australasian Railway Association (ARA) has found. This is an increase from the record $A 12.9bn spent in 2021-22.

At the same time, the ARA released a survey of attitudes to rail showing that cost of living pressures were one of the main reasons that would lead people to use rail more in the next six months.

The spending activity report, Australian Rail Market Outlook, confirmed the sector is growing, with $A 129bn in rail construction and maintenance forecast to be spent in the 10 years to 2031-32, compared with $A 96bn over the previous decade.

Over the next 15 years, $A 154bn in rail construction work is expected as the wave of new projects continues.

ARA CEO, Ms Caroline Wilkie, said the report confirmed Australia was embarking on a period of construction that will transform the rail network for generations to come.

“The strong pipeline of rail projects recognises the essential role rail will continue to play as part of our public transport networks and freight operations,” Wilkie says. “In the short to medium term, these projects will help meet Australia’s transport needs and enable our sustainable growth.

“Longer term, these projects will support our rising population and help achieve the country’s net-zero (emissions) targets, by taking more cars and trucks off the road and encouraging greater use of sustainable transport options.

“This strong focus on new projects recognises the value of rail to our economy and community and addresses decades of historic under-investment when compared with other transport modes.”

In 2021-22, there was $A 10.73bn in rail civil construction activity - surpassing 2018 forecasts for the period - and $A 2.13bn in maintenance activity. Rail construction work increased by 2.9% in real terms in 2021-22, representing the sixth consecutive year of growth.

The report found publicly funded major projects across New South Wales, Victoria and Queensland would account for 77% of major project work in 2023-24, with key projects such as the Sydney Metro, Inland Rail and Melbourne Airport Rail driving growth over the medium term.

Rail activity in Western Australia, historically heavily driven by private funding, will be boosted over the next two years as the state government’s Metronet programme ramps up. Activity in the Australian Capital Territory will increase in 2023-24 due to the Canberra Light Rail Stage 2 project.

Wilkie said this next phase of growth represented a tremendous opportunity to drive innovation and ensure greater productivity and efficiency within the rail industry.

The passenger survey canvassed 2500 metropolitan residents across Sydney, Melbourne, Adelaide, Perth and Brisbane and found that while people’s use of rail was changing, public transport users recognised the affordability and sustainability benefits of rail and would welcome the increase in service frequency that will result from the projects now underway. A total of 43% said that more frequent services would encourage them to use rail more.

“With the cost of living continuing to rise, rail offers a great alternative to ease household budget pressures and escape growing congestion on our roads,” Wilkie says.

“Projects such as the Sydney Metro, Metro Tunnel Project, Suburban Rail Loop, Cross River Rail and the Metronet programme will increase the capacity of the rail network to meet growing demand.”

An interview with Caroline Wilkie will appear in the January edition of IRJ, The Railway in 2023.