Australia is in the middle of an unprecedented rail infrastructure boom with major projects underway or planned in four of the country’s six capital cities as well as a major national project. Tony Duboudin breaks down the projects and considers the challenges they face. 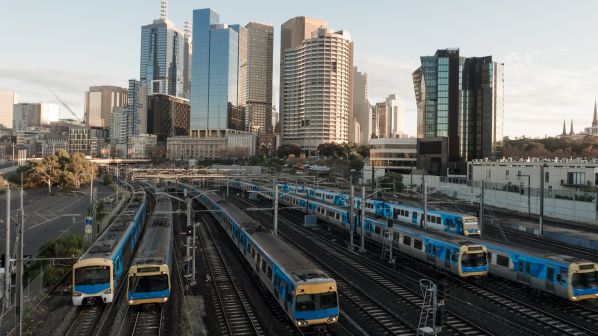 Melbourne’s suburban loop will allow passengers to transfer to other lines without transiting through the city centre. Photo: Shutterstock/Kummeleon

AFTER decades of neglect with few new rail projects undertaken and low levels of investment by government, there has been a shift over the past 12 years to implement rail and light rail schemes to address the problems of increasing road traffic congestion and sprawl in Australia’s major cities. While many industry observers welcome the increase in spending there is a feeling that this is only catching up.

Dr Philip Laird, associate professor at the University of Wollongong in New South Wales (NSW), says he believes that the total spend on projects now underway, planned and proposed is in the order of $A 100bn ($US 74bn). While welcoming the recognition of the importance of rail, he believes that there are still several projects that need attention.

“There is still no plan of how they are going to better connect many cities in NSW to Sydney,” Laird says. “The NSW government has ordered a new fleet, which is innovative bi-mode (electric and diesel), so you have significant investment in rolling stock. However, the lack of investment in track upgrades to get higher speeds just does not add up.

“This is where I think projects can be better scoped. What we want is more projects like the Perth Mandurah urban rail project, which was well conceived, well planned, well developed and well received.”

Laird says he does not believe the investment in rail is excessive and predictions that post-pandemic demand would make some of the projects less relevant are not correct.

“Sydney’s commuter system was under stress before the pandemic,” Laird says. “Even if the traffic doesn’t fully return to pre-pandemic levels, the investment will still be valid.”

He also believes that the current infrastructure boom could last for at least a decade.

Sydney and Melbourne are the major focus of the boom with both cities building metro systems and planning to build more with eye-watering cost estimates. The cost of these major projects has soared and almost all have exceeded their original budget estimates.

The Grattan Institute, an independent think tank, says in its 2020 report The Rise of Megaprojects - Counting the Cost that the era of mega-projects has arrived. The report points out that it is 10 years since Australia’s first $A 5bn transport infrastructure project, whereas now there are 10 such projects under construction. Before the pandemic, the value of transport infrastructure (including road) under construction for Australian governments reached $A 125bn for the first time, and two-thirds of that was on projects worth $A 5bn or more. Billion-dollar projects are no longer unusual. The Grattan report points out that the 2020 Australia budget upped the transport spend to one-and-a-half times the usual level.

Australia’s mega-projects have already broken records for cost overruns, so far totalling $A 24bn on just six projects, the report says. Inland Rail was originally costed at $A 4.4bn in 2010 but this has now grown with the federal government this year making another $A 5.5bn available taking the total cost to more than $A 15bn.

The project, when completed, will cut 200km off the existing coastal route between Melbourne and Brisbane and offer transit times of less than 24 hours making it competitive with road transport.

Sydney’s Metro City and Southwest metro project was costed at $A 11bn in 2015 but by 2020 the NSW government announced that the cost had risen to $A 15.5bn, and that figure has again risen to an estimated $A 26.6bn. Even before the mega-projects era, cost overruns were a major problem.

Over the past two decades, Australian governments spent $A 34bn more on transport infrastructure than initially announced. Grattan Institute’s analysis of all projects valued at $A 20m or more and built over the past 20 years shows that the actual costs exceeded the forecast costs by 21%.

The institute points out that of the 10 projects worth $A 5bn or more, seven are rail projects while the others involve roads or road tunnels.

What we want is more projects like the Perth Mandurah urban rail project, which was well conceived, well planned, well developed and well received.

The institute also questioned whether Australia’s engineering construction sector has the capacity to manage so many projects on such an enormous scale. Projects worth more than a couple of hundred million dollars can only be taken on by Tier 1 contractors, of which there are just three in Australia: CPB, John Holland and Acciona.

Industry players, large and small, are calling for large and mega-projects to be split into smaller work packages, so that mid-tier firms can tender for them. But even if this happens in future, it will not change what is already underway.
There is also a skills shortage which prompted one industry figure jokingly to observe that that there was not “one half-good railway engineer” in Britain who has not had a job offer from Australia.

Despite these challenges, several major rail projects are underway in Australia’s largest cities.

Sydney: Australia’s largest city led the charge in terms of rail infrastructure by building a standalone metro system. The 36km Sydney Metro and Southwest Line between Tallawong and Chatswood opened in 2019 at a cost of $A 8.3bn.

The second part of the line will run from Chatswood via a tunnel under Sydney harbour to Central in the city centre and then west to Bankstown with nine new stations. This is Australia’s largest infrastructure project officially costed at $A 12bn but it is tipped to end up costing double that figure.

The Western Sydney Airport metro line has been given the go ahead. The 23km line will have six stations linking the airport with western Sydney.

Another light rail project under construction is the Paramatta light rail, officially costed at $A 2.4bn. The 12km line with 16 stops is scheduled to open in 2023. Stage 2, which will add another 10km and 10-12 stops, has not yet been costed. The NSW government is considering the business case and has committed $A 50m to preliminary planning and development works.

The Queensland state government is funding $A 5.4bn of the cost of the project while a private consortium is funding the remaining $A 1.499bn cost under a contract that will deliver a financial return. However, the cost is believed to have increased to $A 7bn, although this has not yet been confirmed by the Queensland government.

Queensland is also home to one of the country’s major mining railway construction projects. The Carmichael Coal Mine rail link involves building a new, 200km 1067mm-gauge railway from the Galilee Basin in Central Queensland to link with the existing network to transport coal to the Abbot Point export terminal for shipment to India.

Bravus Mining, a subsidiary of India’s Adana Group, while declining to give the exact cost of the railway, said that it had so far awarded contracts worth more than $A 2.2bn for the railway. “Completion of the Carmichael mine and rail project is on track to export coal to market this calendar year,” a Bravus spokesperson says.

Gold Coast: The city’s first light rail line opened in two stages for the 2018 Commonwealth Games between Helensvale and Broadbeach and is now being extended by 6.7km to Burleigh Heads at an estimated cost of more than $A 1.04bn. Three levels of government are providing funding and the extension is scheduled to open in 2024. Planning is now underway for a 13km Stage 4 extension to Coolangatta and Gold Coast Airport.

Perth: The Western Australian city’s Metronet project involves building about 72km of new line and 22 stations and making more than 8000 hectares of land around stations available for commercial development.

The major parts of stage one of Metronet comprise 21km of new line linking Morley and Ellenbrook with five stations; extending the Joondalup line by 14.5km to Yanchep; and completion of the 8km Forrestfield - Airport line, including three stations. The Melconnx Consortium was awarded a $A 700m contract in October 2020 to build the Morley - Ellenbrook line.

Metronet will also include station upgrades across the network, a new station on the Mandurah line and level crossing removals and upgrades.

Alstom will supply and maintain 246 C-Series EMU cars that will be built at a new facility at Bellevue in the eastern suburbs of Perth, with the first train due to be delivered in 2022.

The estimated cost of the project is currently $A 7.9bn shared between the Western Australian and the federal government.

Adelaide: The South Australian capital is electrifying the 42km Gawler suburban line at a cost of $A 715m. The project has been delayed several times but now has a completion date of 2022. The work involves the purchase of 121 three-car EMUs, replacement of the signalling system with an Automatic Train Protection system, improved pedestrian safety at level crossings and fencing of the entire rail corridor.

Canberra: The city’s initial light rail line opened in 2019 and has proved so popular that work has started on a second stage: a 10.7km extension with 12 new stops to be undertaken in two stages. Stage 2A will run from the city centre to Commonwealth Park covering 1.7km while the 9km stage 2B line will connect Commonwealth Park with Woden. The cost is budgeted at $A 265m with a completion date of early 2026.

Melbourne: The city’s five-station metro project will cost the state of Victoria nearly $A 14bn with a scheduled completion date of 2025. The state is still completing the removal of the first 50 of 85 level crossings in the greater Melbourne area.

The most ambitious project in Victoria, and possibly Australia, is Melbourne’s 90km suburban loop of which 25km will be underground with a price tag of $A 50-100bn. Melbourne’s suburban network currently features lines radiating from the city centre forcing passengers to travel into the centre in order to access another line. In contrast, the suburban loop is an orbital line linking suburbs between 15 and 25km from the city centre. It will have an estimated daily patronage of 400,000. The project started in 2020 with geotechnical work and has a projected completion date of 2050 with sections being completed and opened progressively.

The Victorian and federal governments have each committed $A 5bn to build a rail link to Melbourne’s international airport, although the project’s final cost is not known. Work is scheduled to start in 2022. Trains will run from Melbourne Airport through to Sunshine station which will double in size, then into the metro tunnel and through the city centre, before continuing to the Cranbourne and Pakenham lines. It will include about 2km of elevated track.

Completion of these projects come with the caveat of a skills shortage, which has been exacerbated by Covid-19 restrictions on immigration. Many of the major schemes are now expected to struggle to meet their completion deadlines, meaning that the already high budgets are likely to be extended. Australia might be in the middle of a railway construction boom, but it appears inevitable that many of these projects will experience a few bumps along the way in the coming years.