The opening of the Orange Line metro in Lahore has provided a step-change in the quality of public transport available across the city. David Burroughs talks with the project’s managers about how they overcame the challenge of opening the line during the Covid-19 pandemic. 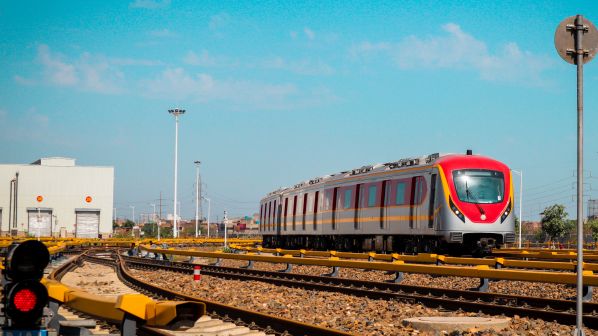 The Orange Line has capacity for up to 25,000 passengers a day.

OPENING a country’s first metro line is always a special achievement, but to do it in the middle of a pandemic is particularly special, and one that the team that completed the Lahore Orange Line metro, which was inaugurated on October 25 2020, are keen to share.

“We commissioned and operated [Pakistan’s] first urban mass transit project right when we were in the pandemic,” explains Orange Line deputy manager, technology, Mr M Omar Shahid. “We ensured our staff were trained and all the systems were working, and opened up commercial operations, ensuring the strictest safety and quality standards.”

Lahore, the capital of Punjab province, is Pakistan’s second largest city after Karachi, and the 26th largest in the world. Stretching for 27.1km from Ali Town to Dera Gujran, the line is designed to alleviate the rampant congestion plaguing the city.

The project was built under the China-Pakistan Economic Corridor (CPEC), a part of China’s Belt and Road Initiative (BRI). The programme was launched in 2013 and includes projects throughout Pakistan intended to rapidly upgrade the country’s infrastructure through the construction of transport networks, energy projects, and special economic and technology zones.

The $US 1.62bn metro line, funded through a loan from China Exim Bank, was built to Chinese standards using Chinese technology and equipment. The line is overseen by the Punjab Mass Transit Authority (PMA), which conducted the tendering, contract award and operations management on behalf of the government.

“All the operational rules and regulations, and the safety and quality standards are set according to our service level agreement (with PMA),” says Orange Line deputy manager, quality, Mr Salman Ahmed.
The China Railway Corporation and the Northern Industrial Association signed an engineering, procurement and construction (EPC) contract for the mechanical and electrical elements of the line in April 2015.

On February 25 2020, the operations and maintenance contract for the line was awarded to a joint venture of Norinco International, Guangzhou Metro Group and Daewoo Pakistan. The contract runs for eight years, and includes the gradual handover of operation and maintenance to local authorities.

The network is controlled by communications-based train control (CBTC) signalling developed by Casco, China, with support from Alstom. This provides six operating modes, allowing operation at up to Grade of Automation 3 (GoA3):

The biggest challenge to delivering the project was the Covid-19 pandemic, which restricted movement and disrupted supply chains.

Central to the strategy to keep the project going was the introduction of a “bio-secure isolation bubble” in June 2020. Technicians, engineers and management personnel lived on-site, continuing work despite ongoing movement restrictions. A strict testing regime was implemented and all staff were vaccinated as soon as vaccines were available, including receiving booster shots. Operational staff stayed in a hotel and were given online training ahead of the line opening, before switching to practical training during the Covid-19 pandemic.

Deputy general manager, safety and technology, Mr Nouman Akbar says that major steps forward have been made through the transfer of technology and skills from China to Pakistan, which will support the construction of other metro lines in the country. Akbar explains that thousands of staff from China were required during the construction phase, but this was reduced to several hundred during the operation and maintenance phase due to the high level of local training provided. More than 100 train drivers are now also Pakistani.

The Pakistani management team for the project has experience of working on projects in Qatar, Saudi Arabia and Dubai as well as further afield in Germany, Turkey, Malaysia and Singapore, with this proving invaluable when building the Orange Line in Lahore.

General manager, safety and technology, Mr Pan Song, says that alongside the normal challenges related to the pandemic, a major challenge was working with a new culture in Pakistan, quite different from that in China. “We had to forget all the ways we had in China and learn how the local employee culture works, and how they should be trained,” he says.

The line also faced some concerns from environmentalists during the initial planning stages, which were later allayed through modifications to the design. Procuring the resources required for construction of the line was also challenging, with the required supply chains not already in place.

After the line opened, passengers had to be educated on how to use it, including how to buy a ticket and read the timetable, with educational safety guidelines published to inform passengers. Passengers also had to be shown how to use escalators and lifts, which are not as common in Pakistan as elsewhere.

“That process was very swift, because our operations department was very engaging,” Shahid says. “Plus, this is the time of social media, so news spreads really fast. Once the news was out, people were able to understand how to get tickets, how to read the timetables, and how to move around the city.”

Akbar says that during his time with Atkins working on Dubai Metro, there was a shift in the culture where more professionals began using the line because of its comfort, convenience, punctuality and safety. He says this trend in public behaviour is now visible in Lahore; reducing the carbon footprint and ensuring sustainability.

“Many students, lawyers and teachers are using this line and many are regular commuters travelling between the rural side and the urban side,” Shahid says.

“Asian countries need projects which are sustainable and carbon-free, fuelling the global economy for a better future.”

Following the line’s entry into service, the government is continuing to explore ways to innovate by installing solar panels to provide traction power.

“It’s a 750V dc network and it uses a lot of electricity in the stations, depots and stabling yards and the line itself,” Akbar says. “The government of Pakistan is working on that, and they are looking for investors as well. They are looking for vendors to build a solar park very near to our facility on our own land and bring that electricity to the national grid and use that power to light up the Orange Line to ensure the sustainability goal of Pakistan’s economy.”

The government is now planning three more lines in Lahore:

In November 2017, Pakistan and China agreed to launch mass transit projects in Quetta, Peshawar and Karachi. This includes the 43km Karachi Circular Railway (KCR), with an estimated cost of $US 1.9bn, and the Quetta Mass Transit project.

International manufacturers and suppliers such as Alstom, Thales, Siemens, ABB, CRRC and CRSC are looking to enter the rail market in Pakistan, supplying hardware, software and training.

“Direct foreign investment is what Pakistan needs,” Akbar says, adding that it is becoming increasingly important due to the worldwide economic situation, with increasing inflation fuelled by a slow recovery from the Covid-19 pandemic and rising oil prices caused by the war in Ukraine.

“There are challenges as to how we can subsidise and finance these projects,” Akbar says. “Pakistan is a developing country like India and Bangladesh, and all these Asian countries need projects which are sustainable and carbon-free, fuelling the global economy for a better future.”