Fully charged: why batteries are the best bet for faster decarbonisation of rail

Andrew Barr, CEO of Hitachi Rail, explains why batteries are the right solution for railway decarbonisation. 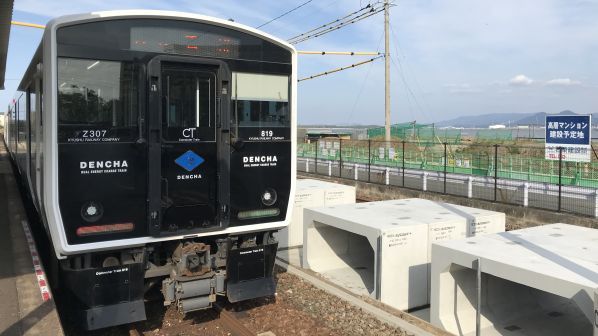 Hitachi has extensive experience with battery trains in Japan.

AS an engineer I find the speed of innovation in batteries incredible, not just because they’re getting faster or increasing in range thanks to massive investment from the automotive sector, but because I think batteries are our best bet to decarbonise the rail sector quickly and affordably.

As the recent Intergovernmental Panel on Climate Change (IPCC) report on climate change showed us - there is no time to waste. At Hitachi we’re committed to playing our part. Hitachi has long-term environmental targets, including striving to achieve carbon neutrality at all its business sites by 2030 and an 80% reduction in CO₂ emissions across the company’s value chain by 2050.

Many of our customers and partners in the supply chain have made similar commitments to net zero. And we are calling on our supply chain partners, through our partnership with Ecovadis, to help us get there too - their execution and new ideas will power us forward. We can’t do this on our own.

If we want to get the railway to net zero, we’ve got to ditch diesel. The ongoing electrification of railways over recent decades makes it one of the lowest carbon forms of transport. According to the International Energy Agency (IEA), globally around three quarters of passenger rail is already electric, and the remaining quarter runs on diesel.

Electrification has a big impact on emissions from rail. For example, analysis shows the Hitachi class 385 EMU fleet on the Edinburgh - Glasgow route cut CO₂ emissions by 10,358 tonnes in 2019, compared with the previous diesel fleet. Over its 30-year lifespan, the fleet could deliver an environmental benefit equivalent to planting over 5 million trees or taking 2238 cars off the road each year.

Why haven’t we gone further with electrification? There’s nothing new about electrification of rail, but there is still a long way to go. For example, today still only 57% of the British railway network has been electrified.

Why haven’t we done more? It’s all down to the business case. Industry pundits will give you lots of answers, but the simple reasons are that in some places it’s hard to do, can be very expensive, and can also be very disruptive.

That means we still need to power trains where there are no overhead wires, and it means worse outcomes for passengers, who often need to change trains from electric main line to diesel services.

Whilst other countries might be doing better on electrification there are still parts of the railway that remain economically unviable to upgrade. And even with completion of the electrification programme in Britain, we estimate 15% of traction will still require alternative solutions. The two main contenders are batteries and hydrogen, and I think batteries are the fastest and cheapest way forward.

Hitachi is pursuing multiple technologies and use-cases for battery technologies in rail. Where the business case for electrification doesn’t work, batteries can fill the gap and do it more quickly. It’s an important enabler.

In fact internal research suggests that battery technology could reduce the cost of inter-city electrification programmes by 40-50%. Electrification projects could potentially focus on the cheapest and easiest stretches of railway only and rely on battery trains to power themselves through the areas that are prohibitively expensive or disruptive to electrify.

In cities, batteries can help to remove overhead wires as well as improving air quality. Inter-city and commuter trains can use batteries both to overcome the challenges of discontinuous electrification, as well as to pull away from stations - helping to improve air quality.

With five years’ experience operating battery trains in Japan, to our British partnership with Hyperdrive and Eversholt, to our Florence battery trams and the introduction of new Blues tri-mode trains in Italy, we are pioneering in an area we believe will become more and more critical.

Our partnership with sister company Hitachi Power Grids also means we have access to the charging infrastructure required to make batteries even more compelling - whether that’s through overhead lines, rapid charging at stations, or through regenerative braking.

In the long term, hydrogen has got great potential. As an engineer, I think it will be an important part of decarbonising many energy-intensive industries like steel, or as a replacement to aviation fuel.

At Hitachi Rail we think it makes sense to be ready for this future - our Hybari partnership with Toyota and JR East announced last year will see our first hydrogen electric hybrid trains undergo testing in Japan by 2022.

But I don't think hydrogen is the fastest or most straight forward route to decarbonisation.

First, hydrogen just doesn't compete right now; battery has a 20% higher carbon efficiency and a 30-50% lower cost than hydrogen. In other words, batteries are cheaper and greener.

In my view, hydrogen will be essential in the long-term fight against carbon emissions. But in the rail industry, I think the immediate use-cases are going to take time to have widescale impact.

Alternative forms of traction such as battery and hydrogen represent just one pillar of our decarbonisation strategy.

This November, the British government will host COP26 in Glasgow, the focus of which will be setting the roadmap to decarbonise our economies. Hitachi. is proud to be a principal partner of COP26, where we have a chance to articulate and accelerate our own decarbonisation commitments on the world stage. We see three areas where we can contribute to the decarbonisation of transport. It’s a simple plan: