Low-floor LRVs are replacing high-floor trams in the Dutch city. 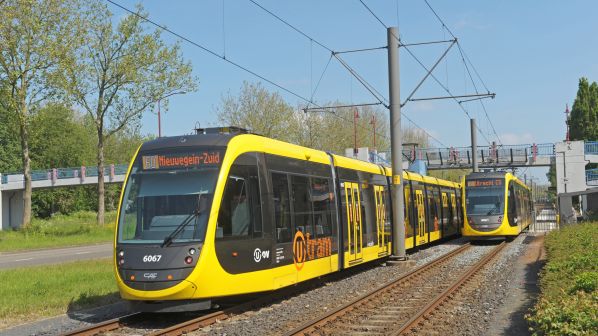 WORK to expand the Utrecht light rail network and convert the existing line to support operation of low-floor LRVs has been completed following several delays.

The new Uithof line from Central Station to the Science Park, which opened in December 2019, has been connected to the converted line from Central Station to IJsselstein and Nieuwegein, with through services now operating. The branch line between Nieuwegein City and IJsselstein South has also reopened after conversion works were completed on July 2 after the Utrecht - Nieuwegein City - Nieuwegein South section reopened in January 2021.

High floor trams supplied by Swiss rolling stock manufacturer SIG have been replaced with CAF Urbos 100 low floor LRVs, while station platforms have been lowered. CAF won a contract to supply 27 five-section bi-directional Urbos 100 vehicles in 2014, and a second contract for 22 seven-section LRVs in 2017. An option for another five seven-section vehicles from this contract was exercised in 2020. The depot at Nieuwegein has also been replaced.

The connection between eastern side of Utrecht Central station and Jaarbeursplein on the western side of the station opened on July 9, allowing through running between the original section and the new Uithof line.

Services are operated by QBuzz, a subsidiary of Busitalia, owned by Italian State Railways (FS).