The fourth part of IRJ's review of InnoTrans at Messe Berlin. 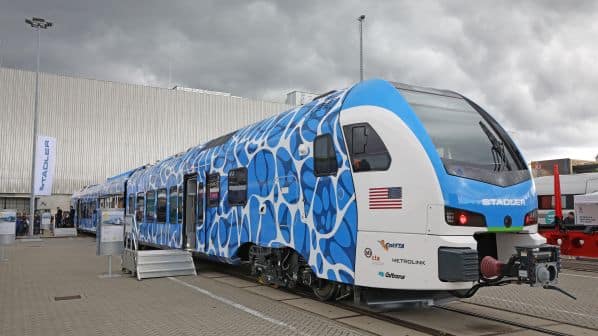 The first Stadler hydrogen powered train for San Bernardino was on display at the outside track area.

IRJ's Editorial Team review the highlights from InnoTrans 2022 in Berlin in September. We have split the article across four separate posts. Part one is available here, part two here, and part three here.

Stadler and the US state of California signed a memorandum of understanding at InnoTrans on September 20. The agreement foresees the purchase of four four-car hydrogen powered trains to be built in the United States and delivered from 2027. This follows the earlier presentation of the first hydrogen powered train for San Bernardino at the outside track area. An option for 25 more trains is planned to replace diesel-powered passenger services funded by the state by 2035.

Long says the industry around the world is often facing the same challenges, including aggressive inflation and a shortage of skilled workers. The complex supply chains that allowed lean manufacturing and just-in-time production strategies also proved a liability during the global pandemic, while rising tensions over political events in China, Russia, and Eastern Europe have raised serious concerns about global security and the ability to source raw materials.

But Long says these geopolitical challenges may also provide opportunities, as companies look for new supply chain strategies, such as moving manufacturing closer to home and increasing international trade with geographically closer partners and political allies to minimise risk.

From steel components to digital systems

LB Foster has over the past 12 years reimagined itself through a series of acquisitions, changing from a rail infrastructure materials supplier to a digital solutions provider. Founded in 1902, the company had previously been what president and CEO, Mr John Kasel, called a “sleeping steel company,” but has now transformed itself into a digitally-focused operation.

The transition began in December 2010 with the purchase of Portec Rail Products, which was renamed LB Foster Rail Technologies in October 2012. “It brought us a global presence that we didn’t have, and also opened our eyes to the fact there’s more than making components,” Kasel says. “It involves … a whole different focus on adding value for our customers that in many cases extended the life of something that we’re already selling to them.”

The next major acquisition was that of TEW Engineering, a specialist in the provision of application engineering solutions, in February 2015. This included its subsidiaries Control & Display, Industrial Automation and Conveyors, TEW Plus and Netpractise, which design, manufacture, and support such applications as control panels, mimic diagrams, dynamic displays, passenger information systems, wayside signalling, and automation solutions.

These have included an innovative passenger information board at St Pancras International that uses Kindle Paperwhite technology to ensure the sign can be read in the station’s bright environment. However, Kasel says the company had previously been unable to build on its success and expand its market until it had the financial backing of LB Foster behind it.

“We went from being a mechanical engineering-based company working on new track to supplying electronics, software and engineering to complement that,” adds LB Foster VP technology services and solutions, Mr Peter Jones, who joined through the Portec acquisition. “And a lot of it was off track, in the station concourse environment.”

IV develops surveillance, security, and safety solutions, while Skratch gives LB Foster advanced digital display technology and capabilities, allowing the company to follow its strategy of expanding outside the rail sector. LB Foster and Skratch previously collaborated on digital solutions for the retail sector, including the first digital signage application using British Sign Language interpreters in Asda supermarkets - a far cry from the track-focused products that LB Foster had previously been known for.

The new acquisitions have also brought in new staff with different skills and experiences. “They’re innovative, they’re typically younger, they think about the needs of our different customers, and they’re extremely creative and innovative,” Kasel says. “And that’s been the greatest change to our company.”

AS part of its Project E Check, German Rail (DB) is starting to deploy robots in maintenance workshops which can visually inspect under and on the roofs of trains to detect faults. The first prototype robot has been installed in Munich and they are now being rolled out in Cologne and elsewhere.

Called Spotty, the robot digital assistant was developed by Boston Dynamics and Energy Robotics. The robot has four legs fitted with wheels so that it can walk like a dog or roll. It can lower itself, adjust its angle and climb steps.

The robot is used in conjunction with a camera portal which scans the train as it enters the depot. The cameras on the portal can scan 2200 points of interest and collect up to 300GB of data. AI is used to compare the actual situation with how the train should be performing.

“We have two robots so far,” Dr Daniela Gerd tom Markotten, DB board member for digitalisation and technology, told IRJ in Berlin. “It is increasingly difficult to get people to work under or on top of the train, so it is important to push this type of innovation forward. When we combine it with AI we get a very efficient system. Everything we can do using software makes it much faster.”

SIEMENS and Vienna metro operator Wiener Linien unveiled the new Metro X-Wagen driverless train at the outside track area. Siemens won a contract from Wiener Linien in September 2017 to supply 34 driverless metro trains, which support fully automatic and semi-automatic operation. The supplier will also maintain the fleet for 24 years, and has an option to supply 11 more trains.

The new six-car trains have a seating layout designed to optimise passenger movement and provide barrier-free access for passengers in wheelchairs. A transparent partition behind the cab gives passengers a view of the line. Each train has capacity for 928 passengers. The trains are also the first equipped with air-free electro-hydraulic brakes.

ŠKODA Transportation hosted a presentation of its anti-collision system for LRVs, which the company says is the foundation of its offer for future autonomous operation.

Trials have been underway with the anti-collision system installed on Škoda LRVs in Tampere, Finland, since the start of this year while tests are also taking place in two Czech cities.

Developed by Škoda Group’s Digital Technology Centre, the system relies on a combination of a GNSS antenna, Lidar, cameras, odometry and an inertial measurement unit (IMU) sensor. Phase 2 of testing is underway and comprises active braking of the LRV without driver intervention. Škoda says the system measures the weight of the tram and adjusts the braking curve accordingly. In addition, AI/machine learning technology is able to optimise the system’s response to certain conditions with thousands of hours of tests already clocked up.

Škoda says the system is designed to be modular and compatible for retrofit with both LRVs built by itself and other manufacturers. Further deployment is expected in 2023. Ultimately the plan is to continue to evolve the technology to driverless at GoA 4.

Alstom displayed the Coradia Stream HC, a double-deck EMU for Luxembourg Railways (CFL). Alstom regional product director, rolling stock and components, Mr Benoit Gachet, explains that the train is 32cm shorter than a similar train in Germany, which allows it to operate on the French network.

The train also features the wheelchair spaces in the middle of the train to improve accessibility.

VISITORS to a presentation of French National Railways’ (SNCF) Innovative Light Train project heard about plans to develop a lightweight and environmentally-friendly rolling stock solution for France’s rural routes, which make up around one third of the 30,000km national network, and are “the missing part of the railway,” according to ILT project director, Mr Jacques Berling.

CAF is responsible for the design and integration of the ILT, which will feature individual, steerable axles with their own traction motors, developed by Texelis which is drawing on its experience of supplying similar systems for rubber-tyred metro cars. Battery traction will enable a range of 250km, which could be extended to 1000km through the use of hydrogen fuel cells.

Lightweight construction featuring composites and other innovations is expected to reduce capital and operating expenditure by 30% over the whole life of the train, while a 10 tonne axleload will reduce track maintenance costs and make it easier to reopen closed lines for passenger traffic.

Signalling costs are to be reduced through the use of a new signalling system developed by Thales, which will eliminate the need for most lineside equipment, monitor level crossings and enable automatic train operation (ATO) at Grade of Automation 3 (GoA3).