IRJ's Editorial Team review the highlights from InnoTrans 2022 in Berlin in September. We have split the article across four separate posts. Part one is available here, part two here, and part four here. 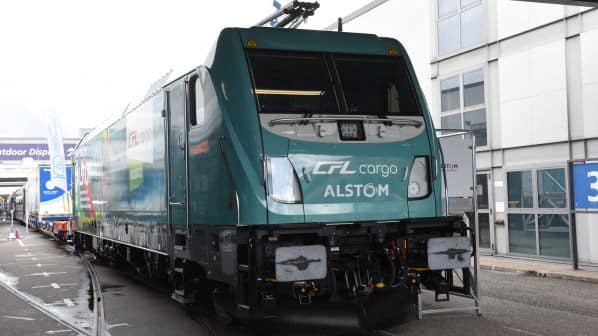 IRJ's Editorial Team review the highlights from InnoTrans 2022 in Berlin in September. We have split the article across four separate posts. Part one is available here, part two here, and part four here.

The Alstom Traxx, formerly developed by Bombardier, is the third iteration of the cross-border platform. Alstom has installed its own signalling systems on the locomotive since its acquisition of Bombardier, and it is developing emissions-free last mile capabilities using a battery. This system is due to be tested in 2024, and should be available in 2025. While the specifications are still being determined, the battery will have at least the same capability as a last mile diesel engine, with the ability to operate for up to an hour.

The MoU with Progress Rail aims to promote collaboration to support sustainability through potential opportunities for the development and deployment of an autonomous, zero-emissions port-to-port concept, which could serve as the foundation for future rail operations globally.

Finally, the agreement with Alstom will see the two parties collaborate on delivering railway innovations, from incubation to commercialisation, including sustainable train technology; mobility and integration solutions between various modes of transport; and the life-cycle performance of the railway system.

Etihad Rail and Alstom will also work collaboratively on a first and last-mile strategy; digitalisation of mobility; testing and commissioning, operation and maintenance; rolling stock configuration and facilities; the development of a learning ecosystem; and fostering local production.

“Through partnering with some of the biggest names in the rail, freight and transport industries, we assure our clients that we are developing the UAE National Rail Network to the highest international standards, to meet their requirements and support them in meeting their business objectives, driving a sustainable, resilient, and cost-effective supply chain,” says Etihad Rail executive director of passenger sector, Mr Ahmed Al Musawa.

The tamper is fitted with traction motors and a pantograph which power the machine, as well as a diesel engine for operation on non-electrified lines or when the overhead power is switched off. The machine can operate at up to 100km/h between work sites.

The electrically powered one-sleeper tamping unit can continuously maintain both plain line track and turnouts. The tamper is designed for maximum flexibility in turnouts thanks to the variable use of 16 tamping tines, third rail lifting, and fourth-rail tamping technology. The machine is also fitted with a DGS dynamic track stabiliser and a trailer with a sweeping unit to ensure a good finish after tamping.

The new hybrid tamper is quieter than a conventional machine, with noise levels reduced by about 20dBA. Plasser says the hybrid drive also significantly reduces the consumption of vehicle fluids with potential savings of around €170 per hour compared with a conventional diesel drive. The machine also requires 80% less oil.

The tamper also has a dedicated crew room with an integrated workshop area so that crew members do not need to leave the machine for breaks or small servicing jobs.

ALSTOM signed an agreement to supply Italian operator Polo Mercitalia with 20 new generation Traxx DC3 electric locomotives, named E.494 in Italy. The delivery of these new units is scheduled to start early 2024 and will be completed during that year.

These are 20 additional units under a contract signed in December 2017 by Mercitalia Rail and Alstom has already delivered 40 Traxx DC3 locomotives.

On the Schaeffler stand, visitors saw how condition-based bearing maintenance is now possible by sharing information from the databases of bearing suppliers, rolling stock manufacturers and vehicle operators by using a data matrix code.

Scanning a code on the bearing brings up information from all three sources, including alerts from an operator’s lineside detectors which monitor bearing faults acoustically.

RSSB and KRRI will cooperate on the following areas: research and development of technology, such as data-based safety management; sharing experience and best practice on technical issues, such as safety assessment methods, rail accident investigation, statistics and human and organisational factors; and safety enhancement initiatives, including research on emerging safety issues identified by data analysis.

“RSSB and KRRI bring decades of knowledge, data, analysis and experience to our respective railways,” says RSSB chief commercial officer, Mr Paul McLaughlin “We will now be able to identify opportunities for collaboration, solving shared problems and unlocking potential for the future.

AMONG the highlights of the Progress Rail stand was a display of its network optimisation technology, which can be used to schedule train, rolling stock and crew movements to maximise efficiency and cut costs.

Progress Rail says its Nitro Suite - which includes the NitroMP movement planner, NitroETA estimated time of arrival prediction system and NitroYard yard planner - is based on technology acquired from Nitryx, a Brazilian software and consulting company, which since 2011 has developed a Decision Support System (DSS) focused on logistics optimisation factors such as fuel savings, predictive maintenance, event recording and automatic train operation.

Progress Rail says this augments the capacity of humans to objectively identify the best course of action. “Nitro is constantly learning and continually using technology to improve your operating ratio,” the supplier says. “Using a combination of artificial intelligence and modern software engineering, our suite of products is becoming more efficient every day.”

The example shown concerned optimising locomotive operation and network timings for freight trains operating on a single track line. The system offers decision support for operators assessing which train should be given priority, either in real-time or to plan movements up to 48 hours ahead.
Data considered include total train length and the length of passing loops and sidings as well as details of line gradients to prevent use by heavier trains.

It is also possible to set the system to operate autonomously and time and pace trains so they arrive at passing places just in time to cross. There is an option to postpone the decision on whether to delay a train until the details of an on-the-day situation become clearer, or to use train automation technology, via remote control of the train throttle and dynamic brakes, to adjust the train’s speed if another train that it is due to pass at a loop is running late.

Progress says operation data such as energy use, fuel quantity used, and level of emissions can be used to support future maintenance decisions and to reduce costs.

Operators can also monitor movements of individual items of rolling stock up to 48 hours ahead to optimise train positioning and to identify a specific vehicle that might cause an operational difficulty and to optimise schedules for crew members to reduce idling and transit times.

Overall, Progress Rail says the technology has been shown to offer a 13% average increase in speeds, helping to reduce labour costs and increase capacity; a 7-30% reduction in the length of time that a train is held to allow another to pass; an 84-95% level of planning acceptance and automation resulting in improved data quality and better operational control; and a 10% reduction in vehicle turnaround times in marshalling yards.

Recent developments to the HPR range include a new series of compact housings that achieve a 20% saving in space and a 25% saving in weight compared with standard HPR products, enabling operators to save several hundred kilogrammes of carbon dioxide emissions during the lifecycle of a vehicle.

GERMAN Rail (DB) has launched what it says is the largest modernisation programme for its vehicle fleet to date, planning to invest more than €19bn in new locomotives and trains by 2030, and took the opportunity at InnoTrans to offer its vision for its new fleets.

Among the exhibits was a prototype double-deck coach developed in collaboration with the state of Bavaria and Bavarian Railways (BEG). The coach is designed to test new seating concepts for both first- and second-class travel and innovative passenger information screens. The vehicle features separate office cabins with wall-mounted desk space as well as a spacious family area.

DB and Talgo also exhibited a coach from the new ICE L. DB awarded Talgo a €550m contract in 2019 for 23 trains as part of a framework agreement for up to 100 trains. Each train consists of a 230km/h multi-system Talgo electric locomotive and 17 236m-long coaches including a driving trailer. The ICE L will feature DB’s new interior, and each train can seat 85 passengers in first class and 477 in second class. The trains will be introduced in October 2024 starting with the Berlin - Amsterdam route.

DB board member for freight traffic, Dr Sigrid Nikutta, unveiled the Freight Train of the Future, which features a dual-mode locomotive, innovative modular wagons, Europe’s new Digital Automatic Coupler (DAC), and a digital information system. The train is hauled by a Siemens Vectron Bo-Bo locomotive which can be powered by 15kV 16.7Hz overhead electrification or a diesel engine running on biodiesel for operation on non-electrified lines or in freight yards and terminals.

The 120km/h locomotive has an output at the wheel of 2.21MW in electric mode and 926kW in diesel operation. It is fitted with a 1500-litre fuel tank. The Vectron has a starting tractive effort of 300kN and a 21-tonne axleload.

The train’s m2 modular wagons are designed for wagonload or block train traffic and have fittings for containers or loading using forklift trucks, or for roll-on or roll-off freight. The train will be connected to DB’s link2rail digital information system which manages wagon ordering, billing and what DB describes as “the best wagon tracing system on rail.”

“We are now investing in the trains of the future,” said CEO of DB, Dr Richard Lutz. “With the record sum of more than €19bn, we are creating the capacity for even higher demand. Modern vehicles not only make the railways more climate-friendly, but also more reliable and customer-friendly.”

STADLER presented the first of its Flirt Akku BEMUs on September 20 and formally handed it over to Schleswig-Holstein transport authority NAH.SH, making it the first BEMU in Germany to be delivered.

Stadler is manufacturing 55 two-car trains at its German factory in Berlin Pankow. The trains will enter service in the northern state of Schleswig-Holstein from May 2023. All 55 trains should be in service from May 2024.

The order placed with Stadler in 2019 also includes a 30-year maintenance contract for the new BEMU fleet. The depot will be built in Rendsburg in the centre of the state’s network. Planning approval for the depot designed by Stadler has been obtained.