While big government investments are prompting railway revivals in some areas, IRJ editor-in-chief, Kevin Smith, argues that smaller “quick wins” are available to others which can still prompt significant modal shift. 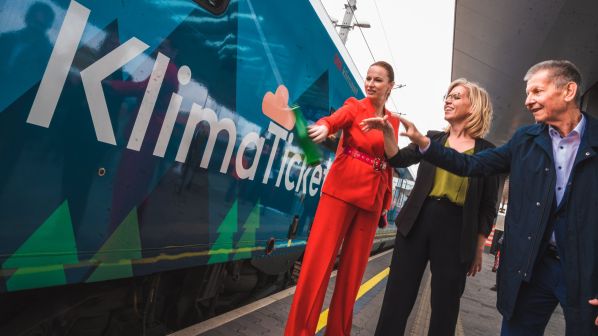 AUSTRIA’s federal government has boldly declared the launch of the KlimaTicket, a universal public transport pass, which became active on October 26, as the dawn of a public transport revolution.

For just €1095 a year, or around €3 a day, KlimaTicket holders have unlimited access to all local, long-distance and commuter rail, metro, light rail and bus services. There is no discrimination by operator, geography, or network for the national ticket. Cheaper regional tickets are also available along with discounted rates for students, families and seniors.

The government is aiming to reduce the number of private car journeys, which currently account for 60% of all transport in Austria, by making public transport “comfortable, easy and affordable.” The government says this is essential for reducing its impact on the climate. And KlimaTicket has had a strong start. Nearly 130,000 KlimaTickets were sold by mid-November, equating to around €110m in revenue. Deloitte also became one of the first corporate partners to offer KlimaTicket as a perk to employees.

Transport minister, Ms Leonore Gesweller, says KlimaTicket is possible due to the wide availability and reliability of public transport services in Austria following substantial infrastructure investments in recent years. This is set to continue in a five-year €18.2bn investment plan for its railway to continue electrification of regional railways and to expand and improve existing lines.

Another country investing vast sums in infrastructure is the United States. President Joe Biden finally signed a $US 1 trillion package on November 15 following more than seven months of negotiation in Congress. Of the $US 550bn in new spending, rail is set to receive $US 66bn and public transit $US 39bn. Amtrak is the major beneficiary, and the funding will go a long way to reducing its maintenance backlog as well as lay the platform for an expansion of services (IRJ September, p22).

The bill is the most significant plan for infrastructure spending in the United States in decades. It is also indicative of the trend evident in Austria of tying rail infrastructure investment with a government’s plans to reduce emissions. This is also found in other recent announcements by governments as diverse as Vietnam, which has confirmed a plan to build nine new and upgrade its seven existing lines, and the Baden Württemberg state government, which is aiming to double public transport usage by the end of the decade. Even Central American countries such as the Dominican Republic, El Salvador and Guatemala, are exploring a railway revival to help meet their respective emissions targets.

Indeed, it was heartening to see a great number of delegates pointing to modal shift as the best way to reduce emissions from transport at last month’s COP26 climate summit in Glasgow. While the British organising committee failed to include rail in the main conference programme for Transport Day on November 10, a flurry of side events during the second week of COP argued that electric cars are not the only answer. European Commission president, Ms Ursula von der Leyen, even declared that “we must drastically shift transport from road to rail.” Intervention from the EU also saw support for active travel and public transport added to a declaration on accelerating the transition to 100% zero emission cars and vans.

Government policy is clearly proving essential in directing more people and freight to use rail and public transport. Yet with only 30% of national decarbonisation plans including any reference, there is work to do to convince all governments that they should be adopting similar strategies.

Unfortunately, big rail projects are expensive and time consuming, and not always attractive in four or five-year political cycles. Both Mr François Davenne, director general of the International Union of Railways (UIC), and Mr Mohamed Mezghani, secretary general of the International Association of Public Transport (UITP), observed that it is imperative for the sector to seek “quick wins” that deliver meaningful results in the next 10 years.

Mezghani said it is essential for railways and transit authorities “to speak the same language as politicians” and offer them solutions such as ticketing reform and station improvements that can appease voters while large and disruptive but ultimately more beneficial projects take shape. Davenne emphasised the need for railways to embrace “frugal solutions.” He pointed to the HydroFlex project that was demonstrated in Glasgow as one such approach. This scheme converted a 30-year-old EMU into a hydrogen multiple unit at a fraction of the cost of a new train.

Technology can also play a big role. Investments in automatic operation, as demonstrated in Hamburg (p30), are potentially a much cheaper and faster way of boosting existing network capacity than building new lines. Integrated ticketing and Mobility as a Service (MaaS) are also gaining traction to overcome the last mile issue. Operators can also improve the quality of their service and introduce effective marketing and branding strategies to convince people to leave their car at home. Britain’s latest open-access operator, Lumo, is aiming to lure people away from domestic flights and onto its trains by offering a fast, sustainable, and affordable service that is straightforward to use. Its early ticket sales are encouraging.

Private finance is another key resource. Institutions such as the European Investment Bank (EIB) are keen to back rail as part of their growing green portfolio of investments. Reassuringly, the US plan requires the exploration of using private finance on any project of $US 750m or more.

The 2020s has to be a decade of action if the world has any chance of combating climate change. Rail is part of the solution, and a lot of great things are already happening to encourage modal shift, all of which should offer heart for others looking to follow suit.